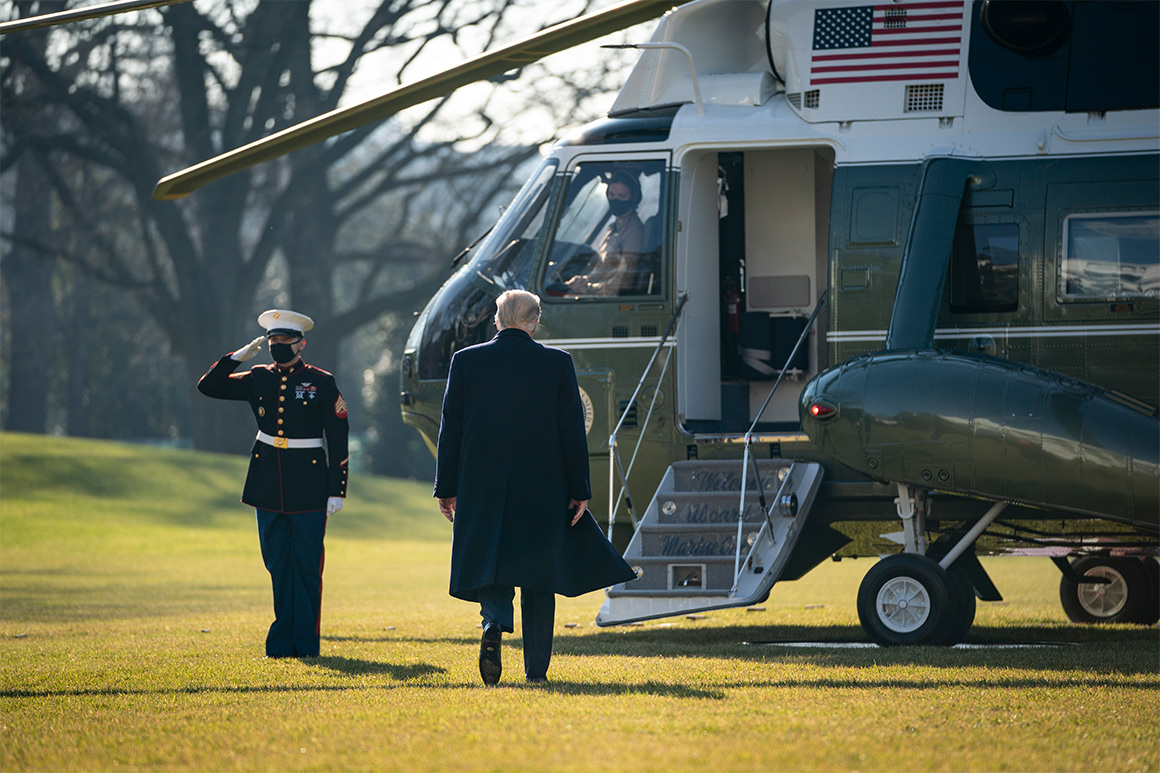 The Republican Party is in crisis. Although more than 70 million Americans voted for President Donald Trump in November, since the election there has been a sharp drop in the number of Americans who call themselves Republicans—and that was before a pro-Trump mob besieged the U.S. Capitol.

There are three paths for the Republican Party, but only one path forward.

One option is to double down on xenophobia and protectionism, recruiting more Marjorie Taylor Greenes, hoping to increase the base by ramping up the rhetoric. But there seems to be a built-in ceiling to this strategy: It gets you passionate supporters but turns off many others. Even at his most popular, Trump’s approval ratings never cracked 50 percent, and mostly hovered in the low 40s. He’s on track to leave office as one of the most unpopular presidents on record.

The second path is the one the party is on now, and the one it will stay on if it does nothing to distance itself from Trump. This is the path of a split within the GOP, and this option is actually in Trump’s interest—maybe even more than path No. 1. What does Trump want after January 20? He wants attention, he wants revenue, he wants continued influence as a possible way to fend off lawsuits. That was his endgame for the march to the Capitol. He knew it wouldn’t change the election results, but he could go out in glory, stamp out the shame of having lost, stoke the grievance forever.

Things didn’t go as planned, but Trump can come back by firing up the old rallies again and rehashing the events of January 6. (“They just took selfies. Since when is it a crime to walk around the Capitol building? She died for a great cause, I’m asking her parents to join me on stage, wonderful people …”). You can already hear the roar of the crowd. Trump can use the events of the past 10 days to fundraise and barnstorm and direct his followers to vote for the politicians who remain loyal to Trumpism, even if he doesn’t run himself.

And in doing so, he will keep the GOP divided, split into centrist and Trumpist wings that struggle to work together. Breaking the Republican Party is Trump’s new business model.

There is a third path. All Republicans have to do is imitate Ronald Reagan.

To explain how the party can move forward, we have to back up and understand how Republicans got here, how the party of Lincoln has come to rely more on nationalistic and racist sloganeering to unify its members than on the limited government, free-market principles many Republicans have long believed are the party’s core ideals.

The basic problem the Republican Party has faced over the past century is that Americans actually love big government. They say they don’t, but if you ask them what spending they want to cut, they want to cut none of it. Social Security and Medicare, the largest parts of the budget? Off limits. Education, roads, research and development? Of course not. Even aid to the poor is popular as long as it’s not called “welfare.” Republicans have never managed to roll back government to where things stood before the Progressive Era, or before the New Deal, or even to before Lyndon Johnson’s Great Society. And they have more or less given up the attempt to do so, because they know they can’t.

So how do you rule, and how do you run, as the party of small government in a nation that loves big government? For much of the 20th century, Republicans completely failed at answering this question, and the Democrats controlled Congress for four decades after Franklin D. Roosevelt. The first successful answer the GOP came up with, under Reagan, was lower taxes. If you could avoid talking about what programs might have to be cut, and if you could give the impression that it was possible to cut taxes without cutting programs, tax cutting was a vote-winner. It worked for Reagan, even though he backtracked when deficits showed up. And it worked for George W. Bush, particularly because by that time Republicans had learned that voters didn’t punish them for producing deficits.

The problem for Republicans now is the repeated politics of cutting taxes has gotten taxes so low that Americans just aren’t so concerned about them anymore. Tax opposition is at its lowest levels since polls started asking about it in the 1950s. Moreover, Republicans have cut taxes so much that it’s hard to put together a big, attention-grabbing tax cut without cutting taxes mostly for the wealthy. These are the dynamics that made the 2017 tax cut unpopular.

Who are Republicans if they don’t have the tax-cut magic that has glued their coalition together? They are who they were before Reagan gave them a way to avoid race-baiting. If the politics of tax cuts has played itself out, then Republicans are back to Richard Nixon’s Southern Strategy. That’s how we got to where we are now: with the appeal of tax-cutting on the decline, Republicans haven’t been able to put together a free-market platform that actually brings them votes, making the party vulnerable to a demagogue willing to appeal to the electorate’s baser, racist instincts.

But even putting aside what a strategy based on racism does to the country, it is not likely to be politically successful over the long term, and is unpredictable even in the short term. Republicans’ poor showing in the Georgia runoffs showed this clearly. The truth is that many Republicans are uncomfortable with the substance as well as the tone of nationalist, xenophobic, protectionist politics, while Republican racism and extremism energize and unify the Democrats and bring them to the polls.

Ronald Reagan showed there is another way.

I’ve spent a lot of time studying Reagan, and one aspect of his political trajectory that does not attract a great deal of attention is how much he and his rhetoric had changed by the time he won the presidency in 1980. When he ran for president (and lost) in 1976, he was complaining about welfare queens and welfare fraud, items that many people thought were simply racism in another guise. But the welfare queen rhetoric had disappeared by 1980, replaced by the sunny, upbeat promise of tax cuts, which attracted many people, including core Democratic constituencies like union members and African American voters.

The lesson is that while politics based on racism can always get you some votes, it doesn’t quite get you enough. To form a new, stable political coalition, Republicans need a strategy that speaks to people’s hopes and self-interest more than to their fears. Tax cut politics appealed across the board—including to the racists, but not only to them.

To repeat a Reagan-like transformation of the party, Republicans have to offer an alternative vision that is appealing enough to voters to serve as a replacement for the dwindling politics of tax cuts.

This is easier said than done, but there are many things in the Republican toolbox that could form the nucleus of that alternative politics. For example, one theme could be emphasizing equality of opportunity—a deeply American concern—by making a big push on education, from elementary and secondary education, to vocational education, to retraining and reskilling, to college access and affordability. The Republican Party could become the party of opportunity, of mobility, of strivers, of dreams. They don’t have to give up their opposition to “socialism”—the opposite of socialism is putting people back to work in a free economy. Policies that focus on improving the quality and accessibility of education can do exactly that, as would a push on parental leave that prevents the drift of workers away from the labor force, or health care policies that make workers more mobile and able to take entrepreneurial risks, or climate change jobs that could rebuild the working class. These are policies that could appeal across the board, including to working-class voters who have found themselves drawn to Trump.

Reagan showed it’s possible to completely reorient a political party; just consider that before Reagan, the GOP was seen as the party that was more likely to increase taxes. But we also shouldn’t underestimate how hard it is to establish that new orientation and to communicate it to voters. Reagan and allies like the late Rep. Jack Kemp spent years persuading, haranguing and browbeating, and at first they couldn’t even convince other Republicans.

For this reason, Republicans should not pass up the opportunity of this moment. One way to jump-start this reorientation today would be to make a dramatic move to distance the party from Trump. A poll on Jan. 6, the day pro-Trump insurgents stormed the Capitol, found that 43 percent of Republicans opposed the attack. Just two days later, as more details emerged, another poll found 71 percent of Republicans opposing the storming, and 58 percent strongly opposing it. At least half of Republicans, in other words, know that something is deeply wrong with their party.

This is where Republican leaders come in. If a significant section of the Republican Party comes out strongly against extremism and simply tells the truth about the election, many voters will pay attention. Many who are drifting away from the party might be reassured enough to come back, and ready to hear the Republican Party’s reset around positive proposals for rebuilding the working class and creating an economy that works for everyone.

This is a moment of peril for the GOP, but it’s also an opportunity that may not come again, with Trump banned from Twitter, with donors backing away, with the entire nation outraged, with elections two years away.

When it’s not clear what the politically wisest course is, you might as well do the right thing. If Republicans do so, then forever afterward Republicans can say that when it came down to it, we told the truth, we risked our careers, we saved our party, we saved the country. The alternative is for Republicans, divided and demoralized, to become reacquainted with those 40 years they spent locked out of control of Congress. They may have plenty of time to read those history books soon.

McConnell would support Trump if he got 2024 Republican nomination

Senate Minority Leader Mitch McConnell said on Thursday he would support Donald Trump in 2024 if he became the Republican...

House Democrats have stayed in lockstep on their $1.9 trillion pandemic relief bill. Once they pass it, the real battle...