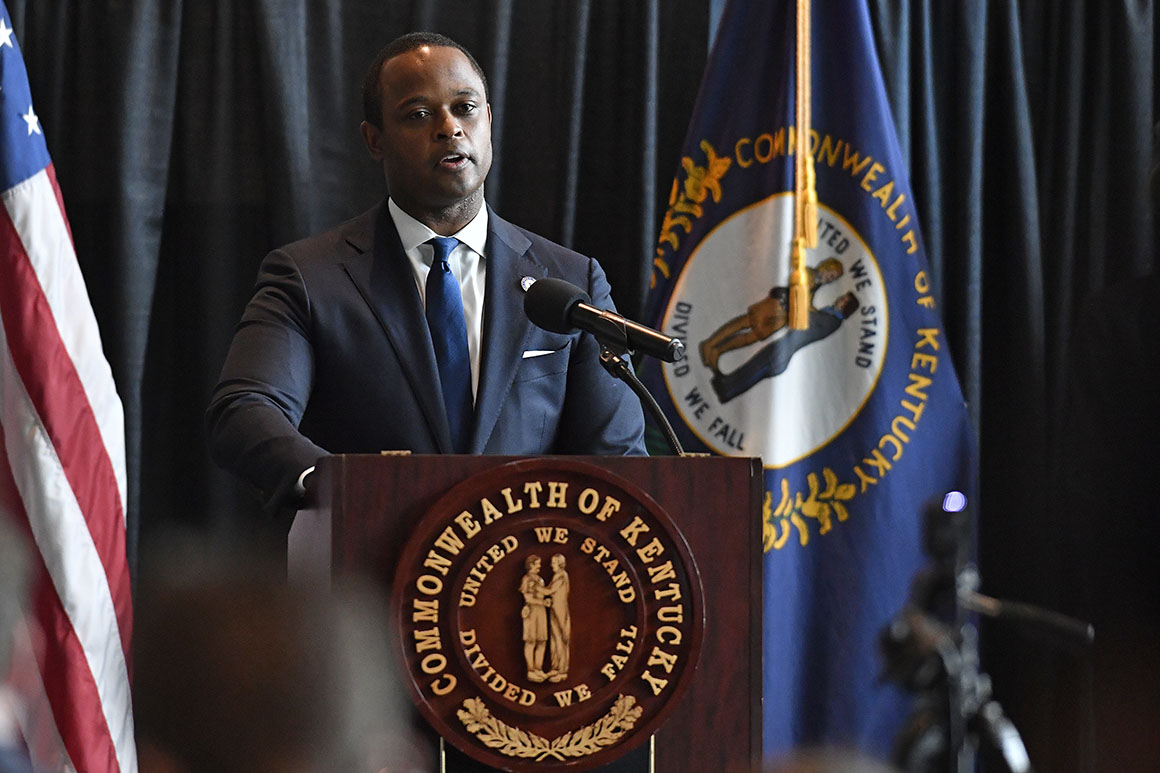 Kentucky Attorney General Daniel Cameron — the 34-year-old, up-and-coming Black Republican who snagged a prime-time speaking slot at Donald Trump’s convention last month — has been pegged as a potential successor to Mitch McConnell in the Senate someday.

But after his handling of the Breonna Taylor case this week, Cameron will have to get there over the fierce opposition of many African Americans in his home state and across the country.

For months, Cameron resisted intense pressure to charge the officers who shot and killed Taylor, 26, in her own home in March. Eventually the case went to a grand jury, which this week cleared two of the three officers involved in the shooting. During a lengthy news conference Wednesday, Cameron refused to say whether he recommended exoneration.

Cameron’s performance drew kudos from McConnell and Trump, who said after the Taylor news that the Kentucky attorney general was doing a “fantastic job.” While his handling of the high-profile case probably won’t hurt him with Republicans in future potential bids for public office — it might well help — Cameron has ensured a motivated, well-funded opposition.

“You know what they say? All skinfolk are not kinfolk,” said Phelix Crittenden, an organizer with Black Lives Matter Louisville. “This was absolutely a career-defining moment … [designed] to set him up for stuff in the future. He had a chance to do right by his people. And he chose to do right by himself.”

Some civil rights groups have begun holding strategy meetings to discuss ways to hold Cameron accountable for his actions in the case and plan to work against him if he runs for office again down the line.

“Unfortunately, he was recently elected,” said Arisha Hatch, vice president of Color of Change. She alluded to activists’ efforts to oust St. Louis County prosecutor Robert McCulloch in the wake of Michael Brown’s death in 2014. “There will be repercussions for his refusal to act, and we believe that he should resign or be replaced.”

Elected a year ago, Cameron is the first African-American attorney general of Kentucky and one of six Black attorneys general in the country, two of them Republicans. Indiana Attorney General Curtis Hill, the only other Black Republican who currently holds that post, told POLITICO that Cameron insisted his role in the case “has nothing to do with any personal feelings that he might have or any emotional reactions that might tug at his own heartstrings.”

“I recognize there have been problems in our country with race from Day One, and we’re still dealing with that. So it’s very near and dear to our thought process on a regular basis,” Hill said.

Cameron alluded to his personal feelings at his news conference announcing the grand jury decision, at one point choking up as he invoked his own family.

“I understand that as a Black man, how painful this is … which is why it was so incredibly important to make sure that we did everything we possibly could to uncover every fact,” Cameron said.

“My heart breaks for the loss of Miss Taylor,” Cameron added. “And I’ve said that repeatedly. My mother, if something was to happen to me,” he said, pausing as his voice faltered and he held back tears, “would find it very hard. … I’ve seen that pain on Miss [Tamika] Palmer’s face,” he said, referring to Taylor’s mother. “I’ve seen that pain in the community.”

Critics dismissed his remarks as performative, saying the mention of his race did nothing to alleviate the damage done in the case. Palmer said Friday she “never had faith in Daniel Cameron to begin with.”

Cameron’s lack of transparency on what led to the grand jury’s decision — he has not released transcripts of its deliberations — has compounded frustrations. His Wednesday remarks roughly outlined the circumstances leading to Taylor’s death: that only one of the six bullets fired at her killed her and that none could be traced back to Brett Hankison, the only police officer charged. He faces three counts of wanton endangerment because his bullets pierced the apartment of the family next door.

Pointing to that reporting, critics say the attorney general’s suggestion that Taylor’s death was an unavoidable tragedy is misleading. It has amplified calls for the attorney general to provide more information on the details of the case, something Cameron has said he cannot do to ensure the integrity of the investigation.

“The facts as we know them generally [don’t] really support the charges that were brought,” said Cedric Powell, a professor at the University of Louisville School of Law. “Daniel Cameron in his press conference was really selective about the evidence that he presented and the public doesn’t have confidence in this charge. The charge is just really like a compromise. A really bad compromise.”

Ben Crump, a lawyer representing the Taylor family, called on Cameron to release the grand jury transcripts, saying he believes that not all evidence was presented to the jurors before they made their decision.

“Did [Cameron] allow the one neighbor who they keep proclaiming heard the police knock and announce [themselves] testify before the grand jury? Even though I understand on two previous occasions he declared that he did not hear the police,” Crump said at a news conference. “Is this the only person out of her apartment complex that [Cameron] allowed to testify before the grand jury? That doesn’t seem fair. That doesn’t seem like you’re fighting for Breonna. That doesn’t seem like you’re putting forth evidence for justice for Breonna.”

Cameron’s allies describe him as a hard worker whose team followed the facts of the Taylor case without bias or caving to public pressure.

“To be crystal clear, Attorney General Cameron is not anybody’s enemy. He’s working hard on behalf of all Kentuckians of all backgrounds to uphold the law,” said Mike Lonergan, a spokesperson for the Kentucky Republican Party. “Kentucky has a lot of strong Republican leaders, and certainly Daniel Cameron is one of them.”

Those words of support amplify how polarizing a figure Cameron — who, according to one poll during his attorney general campaign, had the support of roughly a third of African-American voters — has become the past week. Leaders of the racial justice movement in Louisville say that until now Cameron wasn’t especially disliked, but was viewed as part of a flawed criminal justice system.

Shauntrice Martin, an organizer with Black Lives Matter Louisville who attended the University of Louisville with Cameron, said it was “disappointing” to see her former classmate on the opposite side of this case.

“I was hopeful that because we finally had someone who was Black in a position … that possibly, things will be different, at least a little,” she said. “Instead of being better [for] Black people, he’s actually been worse.”