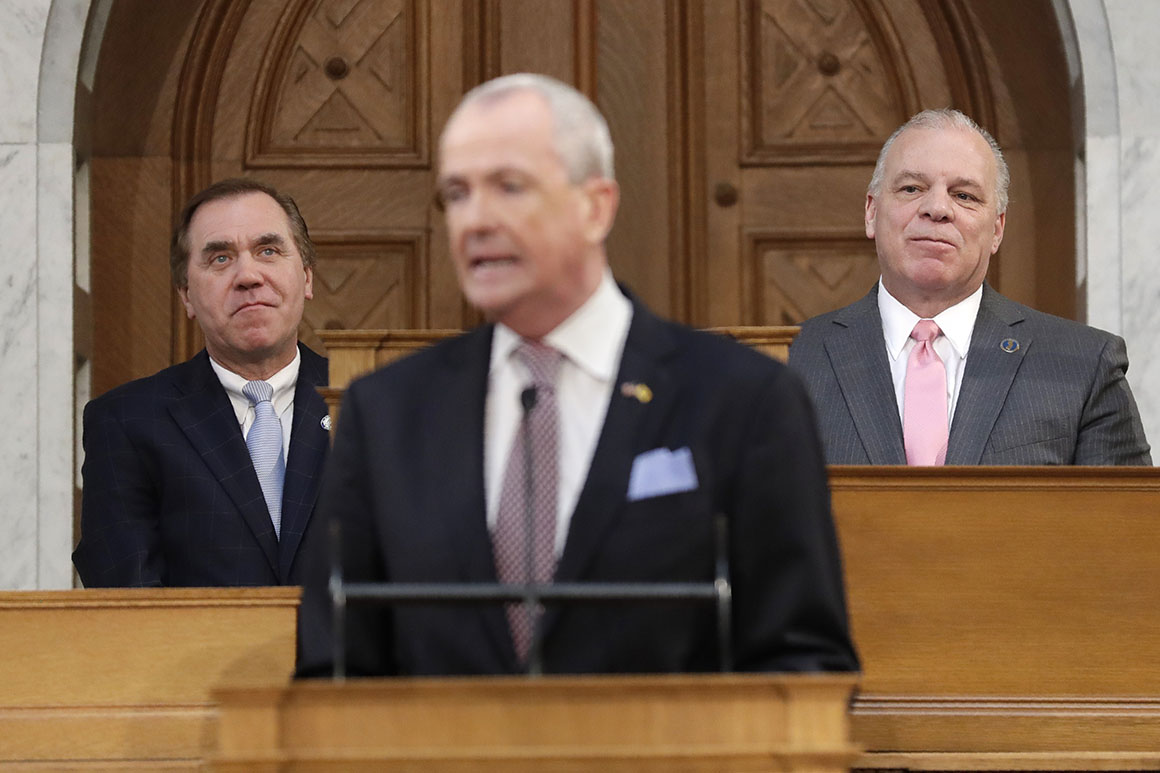 A year ago, a task force appointed by Gov. Phil Murphy was digging up dirt on South Jersey Democratic power broker George Norcross’ use of tax incentives, while Norcross was telling reporters Murphy was “politically incompetent” and in danger of facing a serious primary challenge for reelection in 2021.

Things have changed drastically since then.

The two sides have entered into a kind of détente after years of political schism between the freshman governor’s allies in North Jersey and the South Jersey Democrats, led by Norcross and his childhood friend, Senate President Steve Sweeney.

The thawing of tensions is likely a combination of the coronavirus upending politics as usual in Trenton, Murphy’s political popularity skyrocketing in the wake of the pandemic and the increasing independence of Assembly Speaker Craig Coughlin and his Middlesex County Democrats from the South Jersey Democrats who helped install him in the leadership post in 2018.

There’s also a feeling that it makes little sense for the two sides to openly feud when South Jersey Democratic lawmakers and Murphy will be on the same ballot next year.

“Maybe they just got to know each other better,” former state Sen. Ray Lesniak, a Democrat who has been a Norcross ally in recent years, said, laughing.

Whatever the reason, the Democratic Party in New Jersey is more unified now than it‘s been in years as Norcross, Murphy and Sweeney have put aside their personal distaste for each other — at least temporarily — a year ahead of Murphy’s reelection campaign.

“Things evolve and, frankly, the pandemic has changed a lot of the focus of the discussions, whether it has slowed some things down or caused other things to be placed on the back burner” said Assemblymember John Burzichelli (D-Gloucester), a running mate of Sweeney‘s.

“Priorities get shifted when you have to talk about how you borrow $4.5 billion and then try to hold the economy together,” Burzichelli said, referring to a bill that authorized the state government to borrow up to $4.5 billion — a proposal first floated by Murphy and passed with Sweeney and Coughlin’s cooperation and input.

The good will has produced other results.

In September, Sweeney relented from his previous position and cut a deal on the top issue Murphy has pushed since his 2017 election: Instituting a higher tax on millionaires. Sweeney, who had been a champion of the tax until Murphy became governor, had refused to implement the tax for more than two years.

The Coughlin-brokered deal was part of a largely drama-free pandemic budget that came two years after Sweeney and Murphy’s fight over the millionaire‘s tax came within hours of shutting down state government.

Sweeney has also backed off a plan to form a committee with subpoena power to examine the Murphy administration‘s handling of the pandemic, including how the virus swept through the state’s long-term care facilities, killing more than 7,200 residents and staff.

At the same time, the administration’s investigation into the state’s tax incentive programs has quieted — a final report issued in the fall didn’t focus on Norcross — and Murphy, Sweeney and Coughlin are now negotiating on the future of programs after a year of head-butting which resulted in the programs expiring.

And most recently, a top Murphy ally, Democratic State Chair John Currie, granted Sweeney’s request and appointed him to the Democrats’ state legislative redistricting team, allowing the Senate president to protect his South Jersey district, which leans more conservative than many of the safe Democratic districts up north.

That appointment was not an easy one for Murphy’s allies.

Currie, whose desire to become Passaic County clerk was blocked legislatively by Sweeney, resisted putting Sweeney on the redistricting commission, according to two sources with knowledge of the appointments — and not only because of a personal grievance. Despite growing populations, the Democrats’ delegation includes no Hispanic or South Asian members, and also lacks a voice from the state’s increasingly powerful grassroots progressive community. The five-member delegation includes just one woman.

There’s also been little chatter about a major primary challenge to Murphy, whose approval rating in recent polls has been above 60 percent.

Assemblymember Jamel Holley (D-Union) has said he’s considering a run, but likely wouldn’t be a serious contender as he’s promoted anti-vaccine conspiracy theories that have alienated some of his fellow Democratic lawmakers while developing a right-wing following online.

Former Newark mayoral candidate Shavar Jeffries, who has ties to Norcross, said in early 2020 that he was considering a run for governor, but has not made any recent moves or appearances that hint at a run.

Sweeney, persistently rumored to be considering a primary challenge to Murphy, ended that speculation for good when he secured enough votes from his caucus to return as senate president in 2022. His success in putting together the coalition, aided by the support of Bergen County senators, also ended any hopes that Murphy‘s allies would neutralize Sweeney’s political career.

“The governor’s approval rating is at an all-time high. While many of us were on the Phil Murphy train from the get-go, it’s good to see George Norcross and Steve Sweeney finally getting on board,” said Sue Altman, director of the New Jersey Working Families Alliance and vocal Norcross critic.

Sweeney and Norcross did not respond to requests for comment.

But Brendan Gill, a top Murphy political adviser who was mocked by George Norcross at a 2019 Super Bowl party in Puerto Rico, acknowledged that relations have thawed.

“There have been differences of opinion on some of the substantial policy issues that the governor put forward. But what I’ve seen is the natural progression over the first two years and now deep into the third year of an administration where they have started to find areas of mutual concern and be able to work more closely together,” Gill said. “I think it’s a natural progression for an administration to make after having the ability to kind of get planted, so to speak.”