The Black Lives Matter movement is buckling under the strain of its own success, with tensions rising between local chapters and national leaders over the group’s goals, direction — and money.

From the beginning, Black Lives Matter was a grass-roots effort, born in the streets with no central hierarchy. The idea: to keep power concentrated in the hands of its members, the people.

That’s changing. After a summer of protests that made Black Lives Matter a household name, those atop the movement are making a series of moves to alter its power structure: organizing a political action committee, forming corporate partnerships, adding a third organizing arm and demanding an audience with President-elect Joe Biden.

The moves have triggered mutiny in the ranks. Ten local chapters are severing ties with the Black Lives Matter Global Network, as the national leadership is known. They are furious that Patrisse Cullors, its remaining co-founder, named herself executive director of the group and made these decisions without their input. That’s a move, that, to some, signaled a rebuke of its “leaderful” structure, which gave every member an equal say and kept any one — including a founder — from overreaching.

The operations of Black Lives Matter have always been opaque, with thousands of members and dozens of affiliates. Two of its three co-founders are no longer affiliated with the movement — even as they continue to represent Black Lives Matter on TV. Local Black Lives Matter activists say national leaders cut them off from funding and decision-making, leaving them broke and taking the movement in a direction with which they fundamentally disagree. And as the Black Lives Matter movement grows in influence, with millions in donations and celebrity endorsements, local organizers argue they’re the ones in the streets pushing for change — and they’re not getting their due.

“There’s been intentional erasure,” of local activists, said Sheri Dickerson, lead organizer with Black Lives Matter Oklahoma City. “People assume that that money is distributed to local chapters. That is not the case. People also assume that when actions are made, that national [leadership] has the support and agreement from this collective that what they’re saying is representative of us. And that’s certainly not the case.”

The fallout follows an all-too familiar trajectory of other grass-roots movements. And how its leaders respond to the call for accountability could have major implications for Black Lives Matter’s long-term influence — just as an administration potentially more sympathetic to its goals comes into power.

With Cullors at its helm, Black Lives Matter this year positioned itself as a new leader in activism and politics at the forefront of the national reckoning on race. After forming the PAC, which helped fund its ad campaigns to mobilize Black voters, it formalized its third arm, Black Lives Matter Grassroots, to focus entirely on activism.

But the spotlight on these changes is now exposing fractures in its operation and leadership structure as its ground troops go public with their complaints.

“We became chapters of Black Lives Matter as radical Black organizers embracing a collective vision for Black people engaging in the protracted struggle for our lives against police terrorism,” 10 local chapters wrote in a open letter last week. “With a willingness to do hard work that would put us at risk, we expected that the central organizational entity … would support us chapters in our efforts to build communally.”

The 10 chapters that signed the letter, the self-proclaimed #BLM10, laid out a half-dozen points of contention and long-standing grievances. Cullors is chief among their complaints, they said, arguing she made a power grab when she appointed herself executive director of the Black Lives Matter Global Network.

They also said there’s a lack of transparency over money the movement has raised and how chapters can access it. Since Black Lives Matter formed in 2013, the chapters complained they’ve received scant financial support, despite repeated promises.

Members have brought this up as early as 2016 and frustrated chapters planned to go public with their grievances months ago. But they were encouraged to wait and discuss the issues with Cullors privately. Those discussions were not productive, they say. 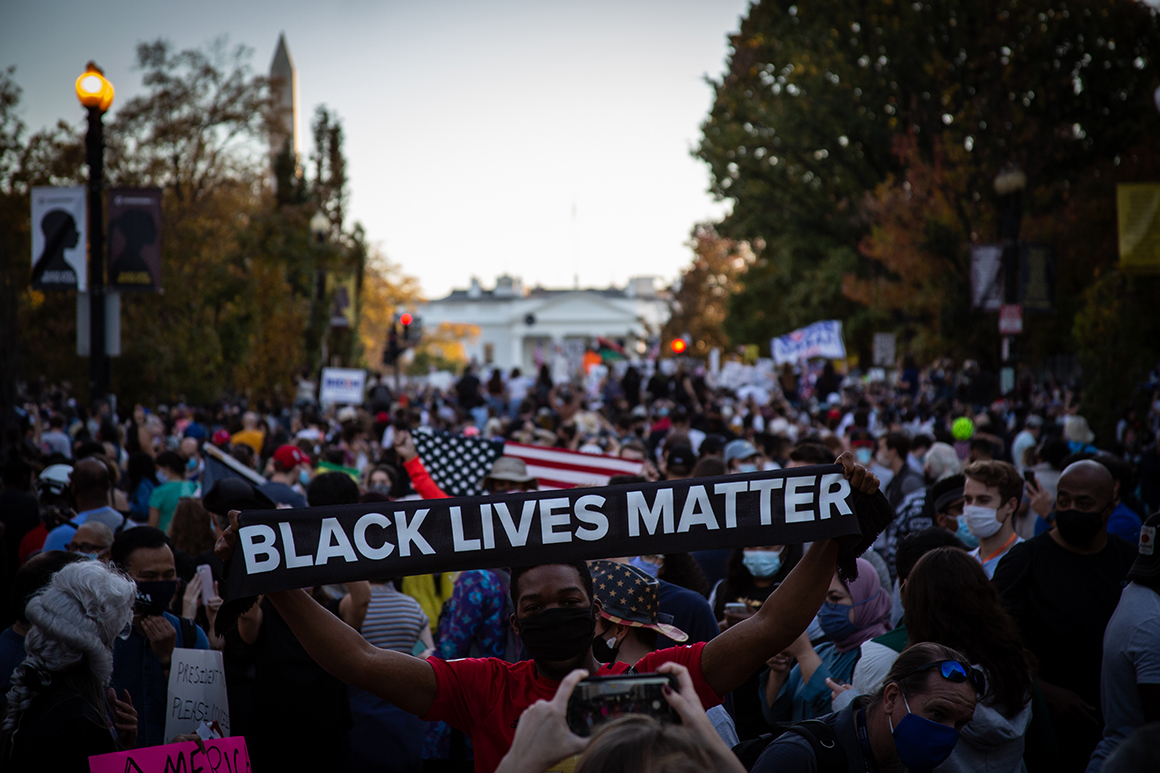 “We didn’t have an opportunity to agree to discuss. Nothing,” said Yahné Ndgo, a lead organizer with Black Lives Matter Philadelphia. “So then we ask questions, and we are told no answers.”

Cullors declined comment. But representatives with the Black Lives Matter Global Network disputed the #BLM10’s complaints in an emailed statement, arguing most of the quarreling chapters are not formally affiliated with the global network. Instead, they say, the #BLM10 are using the Black Lives Matter name in a bid for credibility and money. And because of its funding structure, the network is limited by how much it can give local chapters.

“Chapters that are a part of BLM Grassroots joined a unity pledge that laid out a set of organizing principles,” the statement reads, adding that most of the #BLM10 declined to sign on. “Regardless of their affiliation, we know these groups will continue to do good and necessary work in their communities.”

Garza, Tometi and representatives from the Movement for Black Lives declined to comment for this story. Garza, who is no longer affiliated with the Black Lives Matter Global Network, is now principal of the Black Futures Lab, a think tank that studies Black political power.

Things came to a head this year when the confluence of several crises — the coronavirus, systemic racism and economic turmoil — highlighted both the gravity of the work that Black Lives Matter does and discrepancies in its execution. By the end of June, the Black Lives Matter Global Network had raised more than $13 million in donations and cemented its role as a political power and organizing force. But local organizers said they saw little or no money and were forced to crowdfund to stay afloat. Some organizers say they were barely able to afford gas or housing.

“What [supporters] see is national folks talking about trying to get a meeting with Biden, while kids are literally outside of my door asking for food,” said April Goggans, lead organizer with Black Lives Matter D.C.

If this dynamic sounds familiar, that’s because it is, said Omar Wasow, a political science professor at Princeton University, who studies protest movements.

"It’s almost a truism that movements will [fracture] over time," Wasow said. "It’s exceedingly hard to hold movements together over the long haul."

Activist organizations often split along factions as members disagree about how to advocate for change, Wasow said. Typically, they disagree about whether it’s more effective to work within the system or continue to agitate from the outside. And Black movement leaders from different groups have been at odds over reforms even earlier this year.

Campaign Zero, a racial justice group focused on ending police violence, was widely criticized by a number of Black Lives Matter activists for advocating for solutions they felt didn’t move the needle far enough on police reform. Its #8CantWait campaign, which called for an eight-step approach to ending police violence, took a lot of heat for calling for measures that were tried and failed, while relying on shoddy data to underline them. The Campaign Zero team, led by DeRay McKesson, Brittany Packnett Cunningham and Samuel Sinyangwe, later issued a public apology for rushing the campaign out so quickly. Cunningham later resigned from Campaign Zero.

Which is to say, the splintering of Black Lives Matter is no anomaly.

“And this seems to be the last of those dynamics playing out within the organization itself.”

This is not the first time that Black Lives Matter faced internal conflict. The Black Lives Matter Global Network and Movement for Black Lives are made up of thousands of organizers and dozens of associated organizing groups. While united in their main goals, getting consensus on key decisions has been tricky, particularly as the audience for their work has grown exponentially along with the appetite for solutions to the issues they are fighting.

Keeping track of new developments within the Black Lives Matter movement can be confusing even for insiders. Its structure purportedly gave organizers equal say in decision-making. But ultimately, that sowed confusion about who was formally affiliated with the movement and therefore eligible for funds raised by the Black Lives Matter Global Network Foundation.

This frustrated a number of longtime Black Lives Matter members. It’s what prompted leaders from stronghold chapters like Washington, D.C., Chicago and Philadelphia to sign the letter. They say they didn’t receive guidance or support from the movement they helped build, despite voicing their concerns as early as 2016.

In July, affiliate chapters were invited to apply for funding the Black Lives Matter Global Network Foundation received in the form of unrestricted, multi-year grants up to $500,000. But the #BLM10 say it wasn’t clear which chapters were “legitimate” affiliates. As a result, few qualified for help. That stoked tensions within the ranks, particularly as public opinion towards Black Lives Matter began to slip.

They also disagreed with the new focus on national politics over local fights for police reform. There was “absolutely no way” they would have agreed with those decisions if local chapters were consulted, they said.

“That being a central message and a central focus for the entire nation? Absolutely not something that we would have been aligned with,” Ndgo said, referencing the “protest to the polls” messaging that Cullors was amplifying ahead of November.

Tensions also flared among some organizers when Cullors — along with Alicia Garza and Opal Tometi, Black Lives Matter’s co-founders who are no longer affiliated with the global network — made the rounds on cable TV.

“Chapters who we know, who we’ve been working with, who … do this work, have not been acknowledged or supported, yet you will find them talked about either on stage or in interviews on TV,” Goggans said. “They might as well just be pictures on a fundraising brochure — we all might as well be.”

There was also a disconnect around the scope and focus of Black Lives Matter’s organizing. While chapters focused on police accountability and funding — a largely local debate that has gained national attention — they were unaware that leaders of the global network had shifted their efforts.

“I’m not begging Biden, or Harris, for any type of sit down or meeting,” said Chanelle Helm, an organizer with Black Lives Matter Louisville. “I’m trying to get my mayor out of his seat, because he keeps doing the same shit he’s doing.”

“This is our name, we’ve worked for it. And I feel that chapters have really honored that name and made it strong,” said Amika Tendaji, a lead organizer with Black Lives Matter Chicago.

Dickerson cited the famous scene from “What’s Love Got to Do With It,” when Tina Turner tells Ike Turner the only thing she wants from him in their divorce is her name.

“People recognize our power within our communities,” she said. “We’re not a brand. We are a revolution.”