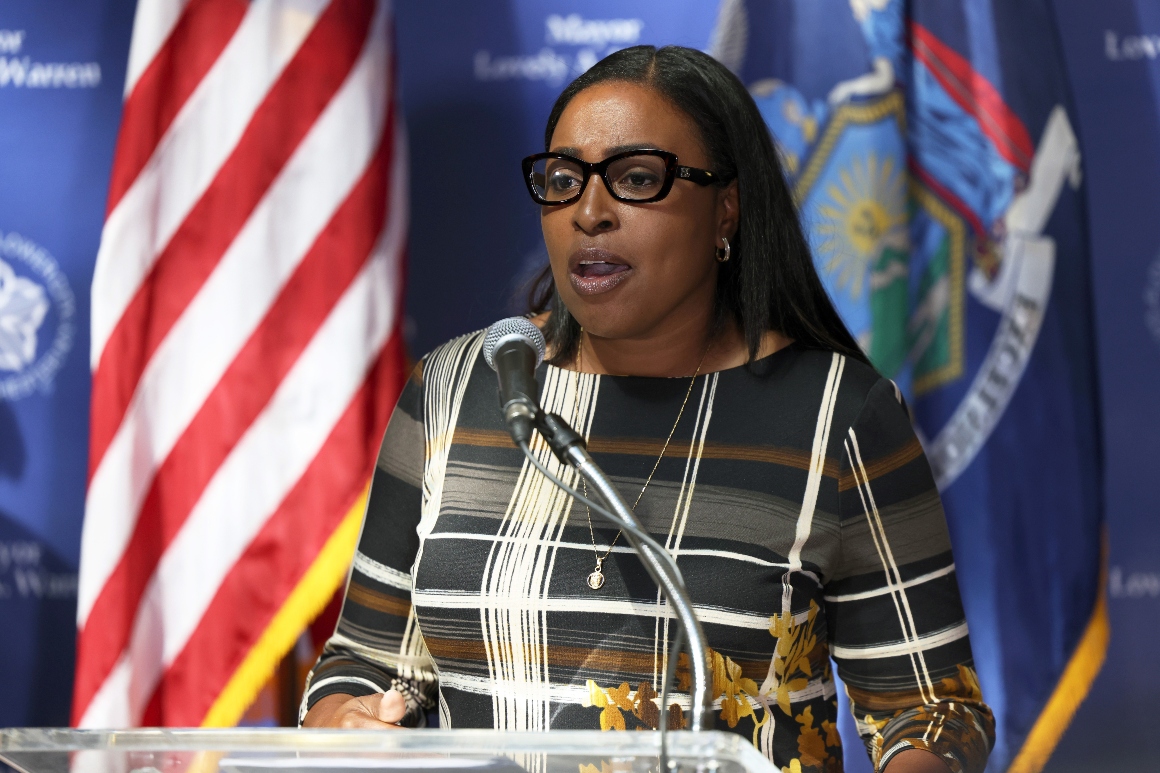 ALBANY — If Rochester Mayor Lovely Warren thought that firing her city’s police chief in the aftermath of the killing of Daniel Prude might ease the pressure on her office and her tenure, she was mistaken.

Even with the chief dismissed two weeks before his announced retirement date, there are at least five separate investigations into how officials handled Prude’s death, with a new trove of documents showing that Warren’s office had been aware of police involvement from the beginning. Some wonder if the 43-year-old Warren, Rochester’s first woman mayor, can survive the mounting pressure — protesters and the police union alike are calling for Warren’s resignation — and a deadly shooting Saturday has now piled more anguish onto the city.

Part of the tension can be traced to Warren’s promise during her 2013 mayoral campaign to bring the city together after years of economic dislocation and racial inequities. Critics argue that the promise remains painfully unfulfilled.

“If from day one, police accountability and oversight and transparency had been undertaken by this administration, you don’t get this kind of a moment,” said Adrian Hale, a native of Rochester and a senior manager of talent strategy, workforce development and education initiatives at the city’s Chamber of Commerce.

“So I think just her failure to take on the issue of police transformation seven or six years ago is what created this issue and has led us to this crisis: a crisis of the destruction of trust in leadership. It’s a crisis of deep adversarial skepticism of the policing institution and the questioning of the social organization within Rochester right now.”

Despite incremental steps Warren and the community have taken — during her reelection campaign she touted her first-term push for neighborhood-based community policing and the implementation of police body cameras — the secrecy involved in City Hall’s response Prude’s death has dashed what little trust had been restored.

“We don’t disregard all the good work has been done, but we have to say, ‘OK, you know, we’re almost back to square one, we’ve actually regressed, we have to change,’” said Bob Duffy, who was Rochester’s police chief and later mayor before becoming lieutenant governor for Andrew Cuomo’s first term.

“How do you prevent these things from happening?" Duffy added. "They happen and it’s not just this administration; every administration has these. I always say this: No chief or no mayor can stop what happens at 3 o’clock in the morning. But what they do control is what happens afterwards.”

Adding to the city’s plight is a rift between local Democratic Party factions, which has historically prevented Rochester’s elected leaders from presenting a unified front in the face of fiscal, racial and social challenges.

That leaves an embattled Warren without some key political support as the crisis deepens.

“It seems pretty clear that she’s fighting for her political life and is taking actions that are a little bit otherwise hard to understand,” said Larry Rothenberg, the director of the W. Allen Wallis Institute of Political Economy at the University of Rochester. “The fact that she fired the police chief with two weeks to go, after he already announced his resignation: She’s trying to differentiate herself from the rest of the people involved in this.”

Prude, 41, died in March after police pinned him to the ground and covered his head while he was handcuffed, naked and under mental distress. The incident was not made public until several weeks ago, when the Prude family released body cam footage it had obtained as part of its lawsuit against the city.

Last Monday, 323 pages of documents were released as part of an internal review. They showed a slew of actions officials took to minimize and conceal police responsibility in Prude’s death.

Amid the uproar, Warren not only fired police Chief La’Ron Singletary but also announced new initiatives to change the policing culture and invited the U.S. Department of Justice and the city’s Office of Public Integrity to look into the city’s response. That’s on top of state Attorney General Tish James’ criminal investigation, the police department’s internal investigation and the City Council’s upcoming investigation.

Warren has said she did not know the details of the encounter with Prude until Aug. 4, and has apologized for not making the public aware when she did see the video.

"We have a pervasive problem in the Rochester Police Department, one that views everything through the eyes of the badge," Warren said Monday. "The culture of policing in Rochester must change."

Some would argue that the culture of Rochester’s divisive politics needs to change as well if the city is to recover from the summer of 2020.

The divides didn’t start with Warren. But the bitterness among local factions was laid bare in her upset mayoral victory in 2013. Warren, who was City Council president and legal counsel to the late Assemblymember David Gantt, beat incumbent mayor Tom Richards in the Democratic primary. Richards was the favorite of Rep. Joe Morelle, who was then the state Assembly majority leader and chair of the Monroe County Democratic Party.

Richards had money, strong polling and party backing. But Warren defeated Richards 57 to 42 percent, thanks, in part, to the strength of Gantt’s political organization in Rochester’s poorest neighborhoods.

“I think much of Black Rochester elected Mayor Warren as a home-grown daughter of the city, as someone who has shared their interests and priorities,” Hale said. “And so police reform is a given: There’s no Black community in the country where police reform is not at the top of the issues that need to be taken. Whether it was explicitly said, ‘I’m going to do this or not,’ there’s an assumption that you will address the disparities and the system bias that plagues our belief system.”

Warren went on to win the general election with 55 percent of the vote, but not with a unified Democratic Party behind her. Even after Richards and Morelle both endorsed her, some City Hall staff and political organizers launched an unsuccessful effort to elect Richards on the Independence and Working Families party lines.

Gantt, who was described in the Rochester Democrat & Chronicle in 2002 as “highly principled to some, blatantly dictatorial to others,” died in July, a blow for the mayor, who lost an ally and a friend. His likely successor, Demond Meeks, bested Gantt’s pick for the spot in the June primary.

Warren wasn’t dealt an easy hand as the city’s second Black mayor. Roughly one-third of the population lives in poverty. The congressional district that houses Rochester was ranked last year as the second worst in the country for Black people. Black people are almost three times as likely to be unemployed and three times as likely to live in poverty. They earn incomes that are less than half of white people’s incomes in the region.

The city’s schools record some of New York’s most dismal performance rates and its school board is so mismanaged that it found itself in a financial hole of as much as $60 million earlier this year. Warren hasn’t been shy about asking Albany for help, but lawmakers have been wary to fund systems which they say lack oversight or clear plans to remedy the situations.

Even before Prude’s death, Warren’s position has been a balancing act of enormous proportions. As a Democrat and Black female mayor, she has faced calls from young liberal activists to be the voice of their movements, even as she must partner with the police department and the city’s power establishment to make the city safer and more prosperous.

She is sometimes laden with responsibility that might not be entirely hers, noted Adam Urbanski, president of the Rochester Teachers Association. Urbanski said Warren has always garnered both “fervent support” and “fervent opposition” but has been a supportive partner with the teachers union.

“Could she have done more? Probably. All of us could do more. The reality is — and I think she understands — that schools cannot be an oasis of excellence in an environment of discord and disorder," Urbanski said.

That environment may become even more disorderly in the weeks to come, for reasons that have nothing to do with demonstrations related to Prude’s death. Monroe County prosecutors are presenting criminal allegations against Warren to a grand jury after the state Board of Elections concluded there was “considerable evidence” that members of her 2017 reelection campaign intentionally evaded limits on campaign donations. A former Warren ally, lobbyist Robert Scott Gaddy, pleaded guilty to different misdemeanor theft charges Wednesday while pledging to cooperate with campaign finance inquiries, a signal that he could be involved in the ongoing investigation of Warren’s campaign.

But that investigation, which the mayor has dismissed as a "political witch hunt," could be overshadowed by continued reverberations from the Prude case, said former television journalist and Monroe County Legislator Rachel Barnhart, one of Warren’s two primary challengers in 2017.

“After seven years of being mayor, if you don’t know that you have problems in your police department, who’s fault is that?” Barnhart said. “People are willing to forgive Lovely Warren for all kinds of sins, but they’re not going to forgive her for Daniel Prude."

Warren’s reelection campaign in 2017 had offered three promises: “better educational opportunities,” “safer streets and neighborhoods,” and “more jobs for Rochester residents.” And after her 2017 primary win she called for unity within her party. "Four years ago we stood up to the power brokers," she said at the time. "Now we need everyone’s support to help our city and to heal our party."

But Warren’s critics say she hasn’t forgotten the challenges mounted against her or the battles she was forced to fight to ward them off. Barnhart says that Warren’s office has instilled a culture of “fear and intimidation and retaliation.”

Other Rochester political observers who declined to speak on the record said that in an environment in which political vendettas aren’t easily forgiven, factions have struggled to unite around common goals proportionate to the scale of the problems in the city.

For instance, when Rochester Assemblymember Harry Bronson, a Democrat, pushed back against Warren’s plea for a temporary state takeover of the city school board — which he said “abdicates our responsibility to lead,” — he found himself with an (ultimately unsuccessful) primary challenger: Warren’s chief of staff, Alex Yudelson.

Many current elected officials declined to weigh in specifically on Warren’s long-term future as mayor, but most expressed confusion and disbelief that the city failed to disclose Prude’s death in any form over a number of months.

Bronson said he does not believe Warren has handled the situation appropriately, but did not comment on her motives.

“We don’t know all of the timeline and there’s some disagreement, but there’s no disagreement on when this was sent to the attorney general’s office,” Bronson said. “And it should have been disclosed, at the very least, that a person of color with mental illnesses died in connection with law enforcement, and it’s going to be investigated. I frankly believe it should have been disclosed long before that.”

One thing is clear: If Warren does survive, she’ll be tasked with a massive job of overhauling a number of local systems, and she won’t be able to do that alone.

“Maybe elected officials should listen,” Duffy said. “And maybe citizens and people, relatives on streets and police officers and other people, should give their perspectives … as opposed to shouting at each other, fighting with each other, trying to one up each other, or trying to give excuses. And you know, leaders take responsibility, leaders don’t blame others. And then behind the scenes, they fix those problems and fix them quickly. And in this particular case, we’re not going to change anything through press conferences.”