CHICAGO — Illinois Attorney General Kwame Raoul saw a question pop up on his Facebook feed after George Floyd was killed by a police officer in Minneapolis. “How old were you when a cop 1st pulled a gun on you?”

“Seventeen,” he answered. It happened at the corner of 50th and Woodlawn avenues on Chicago’s South Side.

Recounting the scene decades later in an interview, Raoul, 55, said he and another kid were calling out to a friend who had just driven by. They were being loud the way teenage boys are, and running. A few beats later, a police car had rolled up and the officer drew his weapon before handcuffing them and taking them to the scene of a nearby mugging. The victims, who were white, initially thought Raoul and his friend looked like the perpetrators but said “they had different jackets on.”

Raoul paused at the recollection, the first time he’d detailed the incident publicly. “If it weren’t for the puffy jacket I wore that day … I think about how that could have changed my life forever.”

It wasn’t his last brush with the police even after he became a local prosecutor, and there are plenty of Black Americans with their own stories about confrontations with law enforcement. But few of them rise in power like Raoul, the son of Haitian immigrants, who served 14 years in the state Senate seat that opened up with Barack Obama’s election to Congress.

Now, nearly two years in as Illinois attorney general, Raoul is a figure to watch as a state official responsible for translating protest and outrage on the streets into actionable criminal justice and policing reforms after Floyd’s death and the August shooting of Jacob Blake in neighboring Wisconsin. While not ignoring the attorney general’s role in consumer-protection issues, Raoul is steadily expanding the job to rethink how law enforcement approaches communities of color, including licensing officers and building a public database of police misconduct. It’s an issue he championed in the Legislature, but the weight of an attorney general title — and a world in which everyone can bear witness to police behavior with their mobile devices — has offered him a chance to pull new levers on criminal justice.

“The timing of this atrocity during a pandemic offered an opportunity to do something bolder,” he said of Floyd’s killing. “And this perfect storm has allowed me to convene people to discuss next steps in a way that was unthinkable before this moment.”

It’s an impetus for law enforcement to help design “real changes,” Raoul said. “It’s allowing us to work toward creating a code of conduct and a real, statewide platform for police accountability.”

“He’s one of the most prominent African American statewide leaders in the country,” White said of Raoul. “Their mere presence [during group discussions] asks us to look at things from a perspective that we might not if they weren’t in the room.”

Color is hardly the only factor. Democratic vice presidential nominee Kamala Harris climbed the ladder of California politics as the state’s attorney general before getting elected to the Senate. Yet while she’s aligned herself with the movement to make a less punitive criminal justice system, her past tough-on-crime positions as San Francisco district attorney dogged her presidential run among the party’s left wing. And Black AGs are in charge of studying some the most heated police killings of the year with Minnesota’s Keith Ellison investigating Floyd’s death and Kentucky Attorney General Daniel Cameron, a rising star in the GOP who spoke at the Republican National Convention last month, is facing criticism for the pace of his probe into Breonna Taylor’s killing in Louisville.

Raoul has rallied other attorneys general seeking clearer authority from Congress to pursue pattern-or-practice discrimination probes into troubled police forces that the Justice Department under President Donald Trump resists doing. And he is pushing for Illinois to license its police officers, an idea that languished in the state Legislature for years, including his own attempts to resurrect the issue.

Now the state’s Legislative Black Caucus is crafting new criminal justice and victims’ rights legislation — a “Black Agenda” — to be considered in November when lawmakers briefly reconvene. Raoul, who said he also wants attention and “comprehensive, effective services” for crime victims, is on the phone or in Zoom meetings with state legislators and law enforcement officials hashing out the details.

"I’ve heard the attorney general recount a story often — about a shooting outside his home. His son was trying to get inside and officers on the scene expressed an attitude that was less than guardian or protective,” said state Sen. Elgie Sims Jr., an active member of the caucus who has worked with Raoul for years. “The frustration that you hear when he recounts that story illustrates what many Black people feel in those moments. That’s the type of experience he brings to the attorney general job.”

Raoul, who recovered from Covid-19 this summer, has pushed back at Trump, joining other Democratic attorneys general in suing the administration for greater protections for immigrants and to challenge White House efforts to limit the 2020 Census. But he’s also sought support from the U.S. attorney and local special agents with the FBI, DEA and the Bureau of Alcohol, Tobacco, Firearms and Explosives to talk about tackling crime, especially gun violence and drug trafficking, which remain stubborn issues in Chicago and subject to Trump’s public ire.

The Floyd case and his own experiences facing a police officer’s gun have prompted Raoul to push the Chicago Police Department to collect data on all incidents in which an officer points a weapon at a member of the public. That work is part of a federal consent decree established in 2018. “My office held strong on including that requirement in the face of resistance from CPD, and I’m determined to ensure it’s implemented,” he said.

Raoul’s experiences growing up on Chicago’s South Side, seeing gun violence outside his front door, navigating Illinois politics and surviving cancer, fuel his ambitions and leave some nerves close to the surface — something that can be seen as a liability.

“I’m a guy who wears my emotion on my sleeve,” he said. As a state senator, he was known to tear up during committee debates.

There is a larger question at hand: In a world in which more diverse voices are starting to reshape the corporate world, media, Congress and the criminal justice system, how do those people — let’s be clear, Black and brown people — get elected to these posts? While Black candidates and officials do make successful runs for many state and federal legislative seats, short of Obama’s presidency, it’s exceedingly rare to see one build a coalition that unlocks statewide support.

“There is an opportunity to right some of the wrongs of these systems by having more diverse leaders who come from these communities, who give lived experiences about how law enforcement treats people. It’s critical,” said Quentin James, president of The Collective PAC, which promotes African Americans running for local, state and federal offices. Collective PAC’s numbers are startling: Of the 346 statewide elected offices in the U.S., 18 are held by African Americans. Five percent. 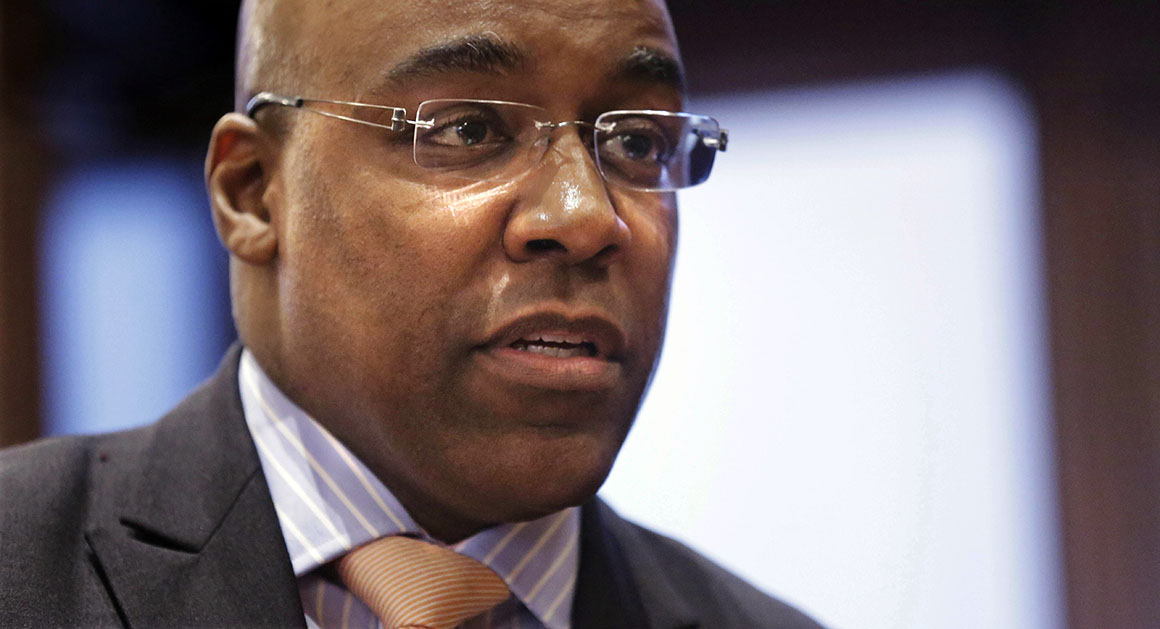 Along with the seven Black AGs, there are only a handful of Black lieutenant governors, including Illinois’ Juliana Stratton. There hasn’t been a Black governor in the U.S. since Deval Patrick in Massachusetts, and just 10 Black people have ever served in the U.S. Senate, including Harris.

Ellison knows this delicate dance. After serving in the U.S. House for a dozen years, he was elected Minnesota’s first Black attorney general in 2018, the same year Raoul and James won their races.

“You have to convince people that the drive to run statewide is to extend service to everyone in the state, and you’ve got to do it with a degree of concern of empathy for people who are outside of your experience,” Ellison said in an interview. “It’s somewhat ironic that as African Americans, everyone takes it for granted that if you’re a white AG, that the AG is looking out for everyone. But people somehow need to be convinced that I’m not only going to be concerned about African Americans.”

Ellison tries to be authentic, and to prove his point he ticked off campaign trips to cornfields and dairy farms across the state, and his mom’s experience growing up on a farm in Louisiana.

For Raoul, there was a sense that being himself — with all his flair on issues he really cares about, like health care — might leave the wrong impression with the news media and white voters.

Talking to voters on the South Side of Chicago is natural to Raoul. But that’s politicking in Chicagoland, where the city is split pretty evenly among whites, African Americans and Latinos. Its suburbs are much whiter and half the state’s population lives outside of Cook County.

For his 2018 campaign, Raoul had to recalibrate his tactics in Southern Illinois, where Confederate flags still flapped in the wind on his way to campaign events and his name might not roll off voters’ tongues. Polls showed Raoul with a lead, but he had a “foreign-sounding name” and was seen by some downstate voters as a “Chicago Democrat” — the stereotype of a machine politician. Barack Hussein Obama plowed through similar difficulties.

“You’ve got to find the right balance between responding with the fervor and the passion the moment demands and not coming off to a statewide base of voters as being an angry Black man,” said Christian Mitchell, an African American state representative (now deputy governor) who stepped in to help Raoul’s attorney general campaign after the primary.

Raoul ultimately won the election — easily, it turned out. Anti-Trump sentiment helped in the deeply blue state but voters may have been taken by Raoul’s heart-on-his sleeve approach. In his last ad before the election, he acknowledges Nov. 6, Election Day, is an “emotional day for me.” It’s the anniversary of his father’s death.

In his victory speech, Raoul tweaked the skeptics who called his race “a nail-biter” and said, “Numbers don’t lie.”