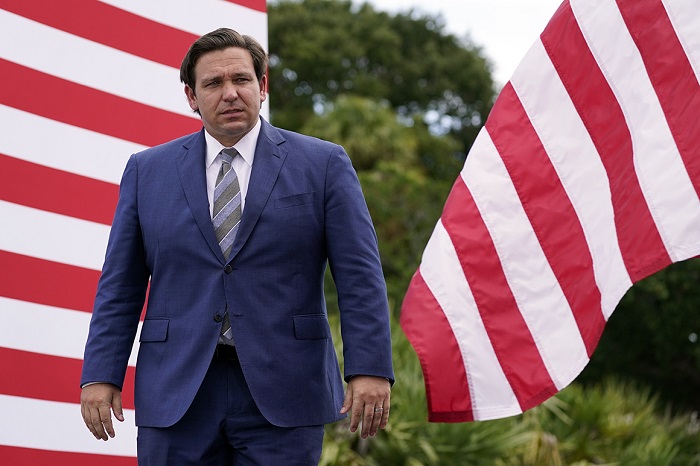 TALLAHASSEE — Florida Republican Gov. Ron DeSantis on Monday outlined an aggressive plan to crack down on what he calls “violent agitators,” turning a huge spotlight to a political wedge issue President Donald Trump’s reelection campaign has focused on for weeks.

The announcement amplifies Florida’s role in a polarizing national fight Trump and other Republicans are waging against Joe Biden and Democrats, who argue the GOP is using small pockets of violence to punish all forms of protest and critics of police misconduct.

“If you know that a ton of bricks will rain down on you, then I think people will think twice about engaging in this type of conduct,” DeSantis said during a Tampa-area press conference.

Flanked by Republican legislative leaders and law enforcement officials, DeSantis outlined forthcoming legislation he said will create a series of new felonies for those involved in protests that turn violent or cause property damage, and threatens to cut state funding for cities that “defund the police."

DeSantis, who did not mention Trump during the press conference, acknowledged the timing of the “Combatting Violence, Disorder and Looting and Law Enforcement Protection Act” was designed to put “law and order” at the political center in the nation’s largest swing state during the final weeks of a campaign otherwise dominated by Trump’s response to the coronavirus pandemic. While adding fresh fuel to a white-hot presidential contest, DeSantis’ efforts are certain to be used to rattle voters in local legislative races, particularly the Florida Senate, where Democrats need to flip just three seats to secure a 20-20 tie in the chamber.

The proposal, the first rolled out by DeSantis since the outset of the pandemic, makes it a third-degree felony to be in a gathering of more than seven people that causes injury or damage; a third-degree felony to block traffic during a protest held without a permit; blocks state funding for cities that “defund the police,” and creates a new six-month mandatory minimum jail sentence for anyone who strikes a law enforcement officer during a “disorderly assembly.” It would also, among other things, give legal liability to a driver who is “fleeing for safety from a mob.”

The legislation is not filed, so the definition of things like “mob” and "defund the police," a broad rallying cry for overhauling law enforcement, are not yet clear.

Calls for policing changes come on the heels of demonstrations that broke out nationwide after the May 25 death of George Floyd, a Black man killed by a white cop in Minneapolis. The protests were led by social justice groups such as Black Lives Matter, and included demonstrations throughout Florida, including in downtown Tallahassee just blocks from the governor’s mansion.

Tallahassee police initially took a light-handed approach toward the protests until an Aug. 29 incident where a counter-protester pulled out a handgun. Then the city cracked down, arresting 17 people who were involved in a protest that unfolded Sept. 5.

Leon County State Attorney Jack Campbell said most of the Tallahassee protesters were peaceful, but other groups were using them as a screen to commit crimes.

“This proposed legislation gives us tools to separate the peaceful from the violent,” Campbell said in an email to POLITICO. “It also establishes the Legislature’s direction that we severely punish those who promote violence through the corruption of these demonstrations.”

With Republican leaders in the Legislature backing the governor, the issue will no doubt dominate the early stages of Florida’s 2021 legislative session. The bill will get early committee hearings and be vocally opposed by Democrats at every turn.

“Most of this stuff is already illegal, he is just Hell bent on silencing any voice of opposition,” incoming House Minority Leader Evan Jenne said. “We will be ready to fight”

He said the move is clearly motivated by a desire to turn the focus in the must-win state from the coronavirus pandemic to rhetoric that mirrors the president’s stump speeches and political ads.

“None of this is about policy,” Jenne said. “It’s about buoying President Trump, who has slipped precipitously in the polls. It’s dog-whistle base stuff.”

DeSantis was joined during the press conference by Senate President-elect Wilton Simpson and House Speaker-designate Chris Sprowls. Both Republicans promised to file the plan for next year’s legislative session. They have also spent the summer also working behind the scenes of several legislative races.

"If you own a business and someone is looting your business, you’re going to call law enforcement," Simpson said. "They deserve the backing to the fullest extent of the law."

The ACLU of Florida quickly slammed the governor’s proposal.

“Gov. DeSantis’ proposal is undemocratic and hostile to Americans’ shared values,” said Micah Kubic, the ACLU of Florida’s executive director. “This effort has one goal: silence, criminalize, and penalize Floridians who want to see justice for Black lives lost to racialized violence and brutality at the hands of law enforcement.”

Roger Weeden, an Orlando attorney with the left-leaning National Lawyers Guild, called DeSantis’ proposal “completely unconstitutional.” He said without an actual legislative bill, Monday’s announcement was nothing more than a political stunt.

“This is all part of Trump’s narrative that the streets are unsafe and cities are in danger,” Weeden said. “All I see is a bunch of red herrings.”