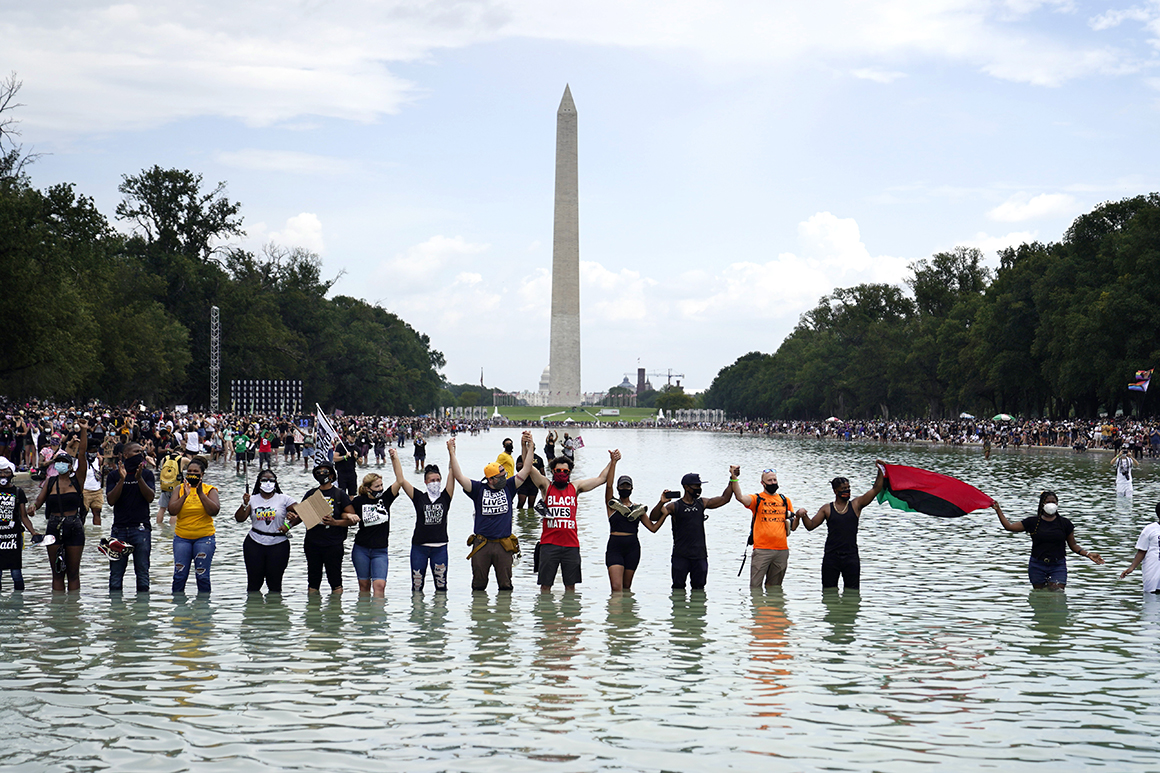 The families of those affected by racial violence in the U.S. banded together on the steps of the Lincoln Memorial on Friday, the 57th anniversary of the March on Washington, encouraging thousands of fellow marchers to carry forward the goals of their predecessors.

At the event, organized by the Rev. Al Sharpton’s activist group National Action Network and dubbed the march to "Get Your Knee Off Our Necks," the brothers, sisters and parents of men and women whose deaths and injuries have created national headlines spoke emotionally at times. They urged rally-goers not to have let their loved ones die in vain.

Thousands clustered at the site of the 1963 march wearing face masks that at once represented the cause that had brought them there and served as a reminder of the coronavirus pandemic that is disproportionately taking the lives of Black Americans.

At one point, Sharpton urged attendees to spread out more, despite the widespread prevalence of masks in the crowd.

The brother of George Floyd, the Minneapolis man who was suffocated to death by police in late May, had to pause repeatedly to gather himself as he told the crowd that “I wish George were here to see this right now.”

As Philonise Floyd spoke, he was surrounded by other family members wearing t-shirts and face masks bearing “8:46,” representing the number of minutes and seconds former Minneapolis police officer Derek Chauvin was recorded with his knee on Floyd’s neck.

“If it weren’t for y’all, I don’t know where I’d be right now, because y’all are keeping me running,” Floyd said Friday, adding that he felt compelled to “advocate for everyone” after his brother’s death and calling the police shooting of Jacob Blake, another unarmed Black man, this week “painful.”

Bridgett Floyd, George’s sister, invoked Martin Luther King, Jr. on the 57th anniversary of his iconic “I Have a Dream” speech in the same spot, as she pledged to use her brother’s memory to fulfill King’s famed dream of racial justice.

She also challenged attendees to critically examine their own legacies during a time of racial reckoning in the United States not seen since the civil rights movement of the 1960s.

Other speakers, like the mother of Breonna Taylor, who was shot and killed earlier this year when police burst into her apartment as she slept, urged protesters to vote.

The sister of Blake, who was shot seven times in the back on Sunday by a Kenosha, Wis., police officer, spoke forcefully as she declared the notion that America is not home to systemic racism a fallacy.

But Widman also denounced violence that has broken out throughout the week in the name of her brother, challenging Black Americans to “fight, but not with violence and chaos. With self love.”

The event also drew other prominent names in Washington, and even featured a pre-recorded address from Sen. Kamala Harris, the Democratic vice presidential nominee.

The California senator noted the activist roots of her parents, and recalled being pushed in a stroller at racial justice marches following the 1963 march. Harris invoked the several major names of the last civil rights movement, calling for their legacies and contributions to the movement to be remembered.

“I have to believe that if they were with us today, they would share in our anger and frustration as we continue to see Black men and women slain in our streets and left behind by an economy and justice system that have too often denied Black folks our dignity and rights,” she said. “They would share our anger and pain, but no doubt they would turn it into fuel.”

Harris added that Friday’s marchers needn’t worry whether they were making their predecessors proud, referencing the op-ed the late congressman and civil rights leader John Lewis penned to be released after his death last month. She warned attendees that the road to racial justice “is not going to be easy” but expressed confidence that a new generation of activists would be able to seize the opportunity to “make history.”

It also featured moving speeches from King’s son and granddaughter, who vowed to carry on their relative’s fight for justice.

“Less than a year before he was assassinated, my grandfather predicted this very moment,” 10-year-old Yolanda Renee King told the crowd Friday. “He said that we were moving into a new phase of the struggle. The first phase was for civil rights and the new phase is a struggle for genuine equality.”

King spoke directly to young people in the audience, asking them to vow “that we have only just begun to fight — and that we will be the generation that moves from me to we.”

She concluded her speech with a message for her late grandfather: “Papa King, we won’t forget.”

Martin Luther King III pointed to the size of Friday’s crowd, in spite of the pandemic, as evidence of the gravity of the current moment.

"We are socially distant, but spiritually united. We are masking our faces, but not our faith and freedom," he said, before making an impassioned plea for attendees to vote in November’s election, in part to honor those disenfranchised in the past.

"We need to vote as if our lives and our livelihoods, our liberties, depend on it," King said. "Because they do."