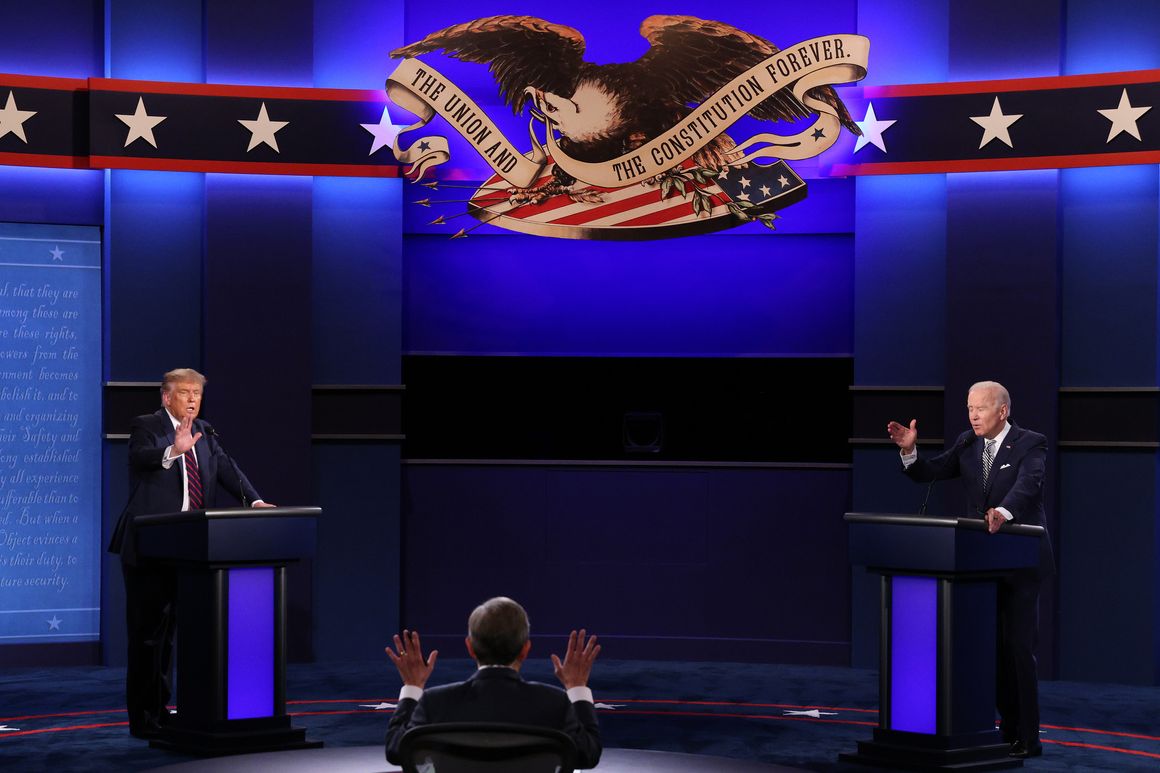 The calls came from the Atlantic, from Slate, on the homepage of the New York Times; from commentators on MSNBC and CNN. Margaret Sullivan, the Washington Post’s estimable media watcher, put it succinctly: “Failing some radical reform in the debate format, there’s no reason for the next two debates to take place as scheduled.”

It’s a rational response to what passed for a presidential debate Tuesday night, featuring a moderator alternately demanding and pleading with the sitting president of the United States to stop interrupting his opponent with endless verbal assaults, including insults to the non-elite status of Joe Biden’s alma mater, and what might have been the first scatological slur in debate history. (Responding to Joe Biden’s frequent “Number one, number two” rhetorical tick, Trump responded: “You’re a number two.”)

There is, however, a reason not to kill off a key feature of modern presidential politics, even if in the wake of Tuesday night, it may seem like a mercy killing. The reason? The format of the next Biden-Trump debate, scheduled for October 15 in Miami, is setting us up for something different. This will be a “town hall” format, with undecided voters posing questions to the candidates. C-SPAN’s Steve Scully is the moderator.

In past elections, the town hall has provided some of the more memorable debate moments: Bill Clinton walking into the audience to ask a woman to describe her concerns; President George H.W. Bush glancing impatiently at his watch; Al Gore striding over to “invade” George W. Bush’s space in 2000, to be met with a curt nod; Donald Trump looming behind Hillary Clinton four years ago (an attempt at dominance that Clinton now regrets not answering with a sharp retort in the moment).

True, town hall questions tend to the eminently predictable, combining personal testimony with impossibly broad inquiries. (“I have $100,000 in student debt; what will you do to make college more affordable?” … “How can you bring this divided nation together?”) But in this campaign, the format offers the best chance to salvage the debates. Why? Because the candidates will be responding to “regular people,” who are sharing these personal, sometimes unsophisticated, questions to a potential president. In this format, the spectacle of, say, Trump interrupting Biden while he’s talking to a citizen about health care would be even more egregious than what happened Tuesday night in Cleveland. It requires the “interrupter” to literally interpose himself between citizen and candidate, something even an instinctive “dominator” like Trump might hesitate to do while he’s still attempting to win votes.

Much has been made of Trump’s flagrant flouting of the debate rules on Tuesday, more extreme than anything he did in 2016, but one important difference was the lack of any real audience. Trump’s greatest campaign talent is playing to a physical crowd, stirring them up and even getting a laugh; with a tiny audience literally prohibited from reacting, his only move was to attack the two men on the stage with him. That won’t be the situation in a town hall, where the audience is woven into the proceedings—even if it still doesn’t amount to a Trump-style packed house.

Further, with the audience as the interrogator, the moderator is relieved of the burden of both keeping a semblance of order while posing the questions. Should Biden and Trump begin bickering, Scully can remind them that there are real people waiting to ask their questions. To strain an image, even the most disputatious of family arguments sometimes cease when the neighbors arrive.

For Biden, the town hall is a format suited to his strength: Making empathetic connections with an audience while sparing him the demands of the more formal debate stage to demonstrate quick recall. (He did not always meet that demand Tuesday. When Trump demanded to know if any law enforcement officials backed him, Biden had no answer; in fact, earlier this month, 175 present and former officials had done just that. On another occasion, Biden both rejected the idea of a "Green New Deal" and said it would “pay for itself.”)

As for Trump, even his supporters recognized that his behavior had likely done himself significant harm, suggesting he may have been too hot, too intemperate. When New York Post columnist Michael Goodwin, an unfailing Trump apologist, calls Trump’s strategy, “A very bad plan … that made him look boorish,” you know it was not a good night for the sitting president. Instant polls by NBC and CNN found Trump’s performance a failure. It is possible (barely) that even Trump himself will not buy the judgment of campaign manager Bill Stepien that “President Trump just turned in the greatest debate performance in presidential history,” and that he will decide to tone things down and bring a measure of civility to Miami. (Suggestion: if you’re looking to lower the temperature, maybe do not use Rudy Giuliani as one of your debate advisers.)

All that said, there is no guarantee we’ll get something better in Round 2. Indeed, given the freedom of the candidates to roam about the stage, and given Trump’s hunger to physically dominate, and Biden’s previous statement that he would “beat the hell out of Trump” if they were in high school, we may wind up witnessing the first fistfight in debate history.

It’s a risk worth taking. For all the justifiable complaints about the debates, and the scarcity of undecided voters this year, they do provide rare occasions where voters can make judgments about the temperament and character of the men and women who seek great power. We should pause before scrapping that flawed but valuable tool.