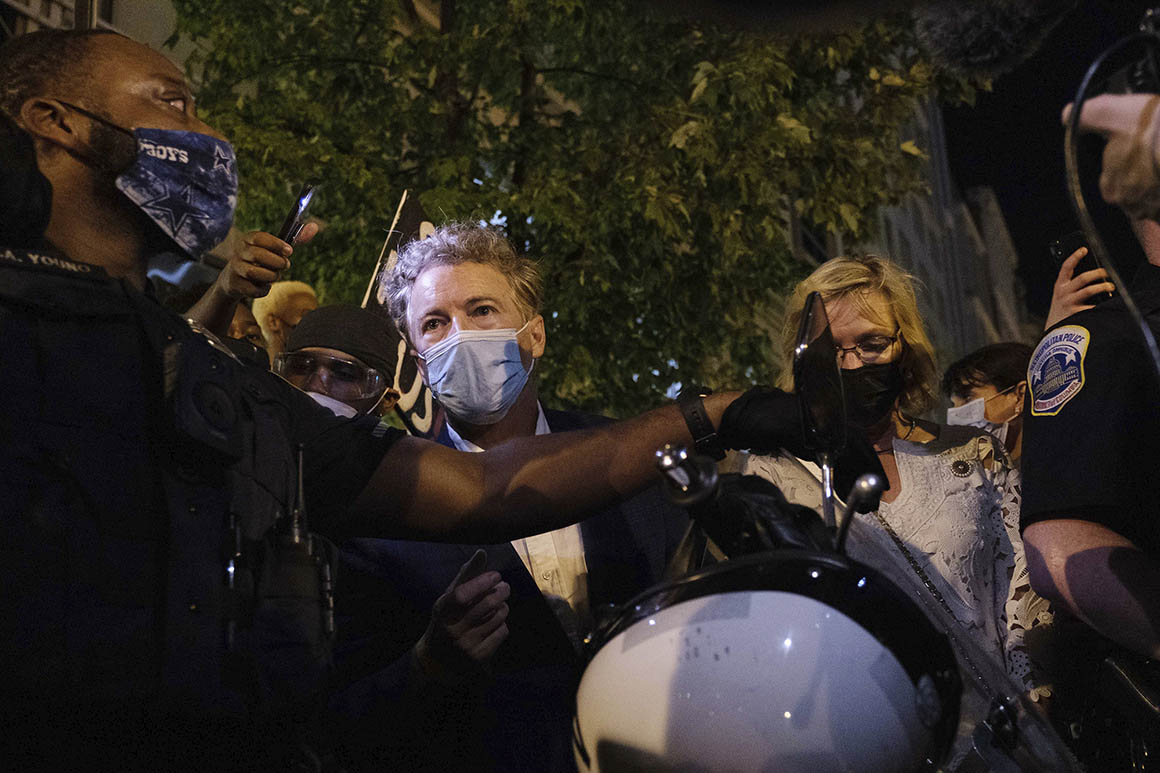 Sen. Rand Paul was confronted by protesters early Friday morning after leaving the Republican National Convention at the White House.

"Just got attacked by an angry mob of over 100, one block away from the White House. Thank you to @DCPoliceDept for literally saving our lives from a crazed mob," the Kentucky Republican tweeted early Friday.

Paul later added that he felt his life was in danger and would have wound up in the hospital or dead had police not intervened.

Videos on social media showed protesters circling around Paul and his wife, Kelley, after they left President Donald Trump’s keynote speech. Protesters shouted at the Pauls, crowding the couple on the street.

Protesters demanded the Kentucky senator acknowledge the death of Breonna Taylor, who was killed by police executing a no-knock warrant in her Louisville, Ky., home. Her death is one of several police-involved killings that have sparked protests nationwide against racial injustice in law enforcement.

Paul, perhaps the Senate’s most libertarian-leaning lawmaker, introduced legislation in June to ban no-knock search warrants and named it after Taylor — a point he emphatically pushed during a Friday morning interview on Fox & Friends.

"You couldn’t reason with this mob, but I’m actually the author of the Breonna Taylor law to end no-knock raids. So the irony is lost on these idiots they are trying to kill the person who is actually trying to get rid of no-knock raids," Paul said.

D.C. Metropolitan Police officers formed a circle around the senator and his wife and escorted them to their hotel Friday morning. During his Fox & Friends interview, Paul said he and his wife were unharmed. Paul’s office did not immediately respond to a request for comment.

Paul hypothesized the protesters were compensated and flown in to instigate a violent riot, but didn’t offer any suggestions on who might have paid them or evidence to support his assertion. That protesters are paid to cause disruption is a common talking point among some conservative figures for which there is no substantive evidence. Such claims have been regularly challenged by fact-checkers.

"You just think, Oh, these are some normal hoodlums from a big city. I promise you that at least some of the members and the people who attacked us were not from D.C. They flew here on a plane," he said. "They’ve all got fresh, new clothes."

Paul also used the incident to go after Democratic candidates Joe Biden and Kamala Harris. Trump and his allies have repeatedly used unrest in cities across the country as a political point, contesting that only the president can protect America with his brand of law and order.

Paul said Harris and Biden have failed to condemn violence in protests and that "this mob is their voters."

"We can’t have Joe Biden rule the country and have no police," Paul said. "I mean, we can’t walk down the street in D.C. Safely now. That’s how bad it is."

When asked whether he felt Republicans would need extra security to walk around Washington, Paul said "probably, yes," and that he doesn’t feel at home in the city.

"I want to live the life of a normal person," the senator said.

In fact, Biden released a video Wednesday condemning police violence and denouncing rioting and looting. Harris, a former prosecutor, pushed for due process for the police officer who shot an unarmed black man in the back in Kenosha, Wis. Biden has rejected calls to defund police departments, saying "most cops are good."

Trump made his keynote RNC speech Thursday night from the White House’s South Lawn, where few crowd members wore masks and chairs were not set up to accommodate social distancing. Blocks away, protesters gathered near an entry to the White House grounds, blasting music, blaring sirens and sounding blow horns to try to cover up the president’s speech. Protesters, including families, young adults and seniors, danced to go-go music and chanted in unison.

As Trump started speaking, protesters engaged in more heated confrontations with Secret Service agents and D.C. police officers. Large groups of police, many on bikes, camped in the blocks near the White House, blocking off streets several blocks away from the grounds.

Paul spoke at the convention on Tuesday, where he called the New York real estate mogul-turned-president "down to earth" and said he was "proud" of the Trump presidency.

The Rise of the Biden Republicans

There are unwritten rules that dictate how American politics works. Former presidents shouldn’t weigh in on quotidian partisan squabbles. An...