And it’s in the comments section of an official Trump campaign livestream.

During the Republican National Convention, the Trump campaign and GOP have been airing the President Donald Trump-boosting content on Twitch, a popular, Amazon-owned livestreaming website renowned for its massive gaming community. The campaign’s official Twitch account, as well as GOPConvention, the official Republican National Convention-affiliated account, has aired the past three nights of the convention to the Trump campaign’s 133,000 followers, and to GOPConvention’s 4,800 followers.

And thanks to the campaign’s apparent choice to leave the comments unmoderated, the site provides an unedited, real-time window into the base instincts of some of Trump’s youngest, most fervent supporters. The remarks range from absurdists tweeting profanity over and over, to overt fetishization of female speakers, QAnon theories and racist tropes; all while battling anti-Trump trolls spamming their comments with cruel jokes about Republicans in wheelchairs.

“President Trump is gonna give us the N word pass,” wrote user KrispTheAlbino during the first night in the RNC chat, referencing a memed phrase that supposedly gives one “permission” to use the offensive slur. Over in the Trump campaign chat, other users flooded the chat with “emotes” — Twitch’s customizable version of emojis — depicting racist images during speeches from people of color, sexualizing female speakers and posting anti-Black Lives Matter images and anti-Semitic memes.

In the social media universe, a Twitch account can reach a certain type of user — overwhelmingly white, young and male, making it a valuable platform for any political organization. Trump’s movement, built on the power of Twitter, has a stronger presence on Twitch compared to other American political campaigns. And the RNC, as it has with all things Trump, has followed suit. The Democratic National Committee, on the other hand, did not stream its convention on Twitch, though it did in 2016, and Trump’s 2020 rival, Joe Biden, does not have a Twitch account.

Yet by expanding its digital reach to Twitch, Trump’s operation has created a platform that highlights elements of the president’s online base that revels in offensive commentary. And with Twitch lagging behind other platforms, like Twitter, that have started policing content more closely, the forum has become a home for those seeking to communicate with less interference.

“There’s always objectionable content on every platform, especially exacerbated by anonymity,” said Hasan Piker, a progressive Twitch streamer with nearly half a million followers who formerly hosted The Young Turks, a streaming political talk show popular in liberal circles. “But since anyone can go to your chat and say anything except for blacklisted words, people who really wanna be racist will always find a way.”

An RNC spokesperson acknowledged the existence of the crass commentary, but noted that such remarks were unfortunately common across the internet and not a Trump-specific problem.

“Tens of millions of viewers watch our convention content on various digital channels,” the spokesperson said in a statement. “Unfortunately, online chat forums can sometimes include vitriolic language from both sides of the aisle. These types of comments are not representative of the vast, vast majority of viewers and we attempt to moderate them when possible.”

The Trump campaign did not respond to a request for comment.

Launched in 2011 as a subsidiary of the now-defunct Justin.tv, Twitch quickly grew in popularity as a hub for video game livestreaming and was eventually purchased by Amazon in 2014 for $970 million. At any given moment, over 1.5 million people are watching their favorite personalities stream, and 4 million unique channels stream every month, according to the company. Twitch has become a lucrative company, as well, with advertisers flocking to the platform to reach the coveted 18-to-34-year-old male demographic, which is increasingly abandoning traditional television. 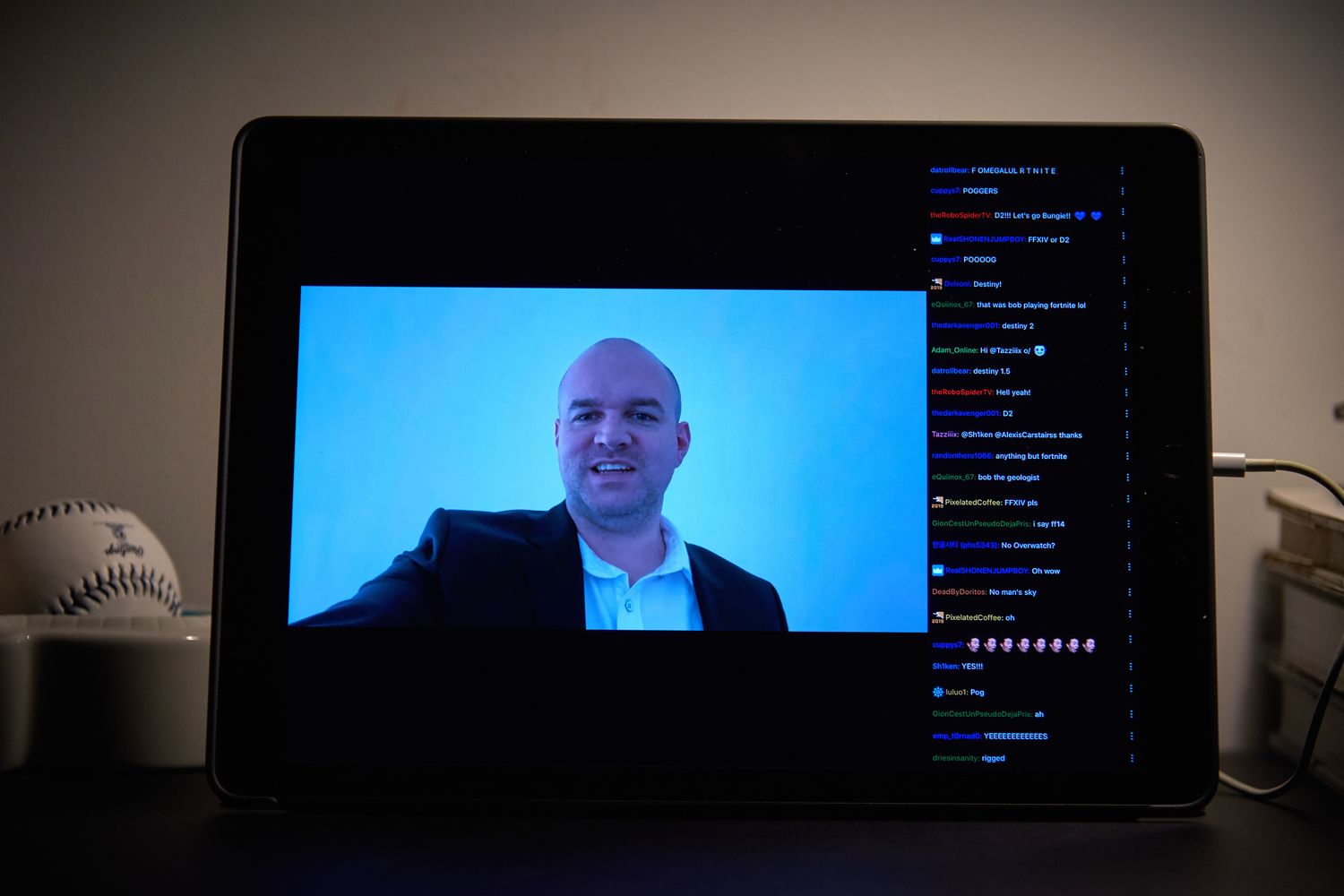 But while it’s known as the home of massive esports tournaments — in 2018, its livestream of the League of Legends World Championship pulled in a collective 28.1 million hours of live viewing — Twitch’s content has gone far beyond the category of gaming, expanding into livestreams of cooking, music festivals, live sports and talk shows, to name a few. And with personalities come politics: the ever-expanding “Just Chatting” category has turned casual gamers into a new brand of pundit, with the most successful personalities in the category boasting hundreds of thousands of followers.

“If people started to see it like the next frontier for talk radio, I think whoever got there first would be successful,” said Jordan Uhl, a progressive activist who frequently uses Twitch streams to raise awareness for various causes.

But while there’s a flourishing liberal and conservative presence on Twitch, there’s also a more noxious side to the platform, as often happens with social-media sites that start out as innocuous communities — 4Chan, Twitter and Facebook. And the more unsavory elements reflect Twitch’s demographics — 81.5 percent male and 55 percent aged 18 to 34, according to Influencer Marketing Hub.

In recent years, facing a vociferous backlash over racism and sexual harassment in the livestream chats — an anonymous forum where viewers can message with livestream hosts as well as other viewers — Twitch introduced tools that allowed channels to moderate their own chats: automated bots that filter out blacklisted words, moderators to review flagged comments before they are published, and so on.

“That, of course, only works if these tools are used,” said Nicole, who declined to publicize her last name because her popular BadBunny political commentary channel, which has 170,000 viewers, has drawn high-profile harassment. It’s up to the channel to decide how to moderate its livestream comments — or, like the RNC’s channel, if it wants to at all.

“So if there is a type of racism that is occurring on these channels that moderators just don’t recognize, or decide to turn the other way when they see it, or [say] ‘it’s just a meme, get over it,’ then that’s going to result in that racism not being weeded out,” Nicole added. “And I think there’s lots of channels on this platform that actually do have a lot of problems with bigotry. And it’s not just racism: it’s racism, transphobia, homophobia, sexism. Bigotry is not something that I could ever say is sufficiently erased from this platform.”

During the RNC broadcast, the Trump campaign livestream chat did not have a moderator, according to the list of users online, nor did the GOPConvention chanel — a puzzling fact that even pro-Trump users pointed out, annoyed that liberal trolls were spamming their chat with Trump criticisms. “Bruh can we please get some mods in here,” user Dadascheck complained at one point during night one.

The Trump campaign joined Twitch in October 2019, competing with Democratic rivals like Bernie Sanders, whose Twitch following is larger than Trump’s and whose online fanbase has faced its scrutiny for its own sexist and bullying behavior. Since its launch, however, the Trump campaign’s channel has occasionally run afoul of the platform’s terms of service, leading to the channel being temporarily banned in July for “hateful content” after posting videos of Trump denigrating Mexicans in his 2015 campaign launch speech.

“In line with our policies, President Trump’s channel has been issued a temporary suspension from Twitch for comments made on stream, and the offending content has been removed,” a company spokesperson told POLITICO in a statement at the time.

Twitch did not respond to a request for comment for this report.

During the convention, the Trump campaign’s Twitch account limited its chat to “emote” only, meaning much of the offensive commentary was restricted to in-jokes using racist emojis — squinting faces during Chinese civil rights activist Chen Guangcheng’s speech, images suggesting Black men hanging in trees whenever a Black speaker took to the podium and people of color shooting each other during an immigrant naturalization ceremony. Men with large noses appeared when Secretary of State Mike Pompeo spoke from Jerusalem.

Often, the “TriHard” emote — an image of Black Twitch personality TriHex, which has been co-opted by racists on the platform — appeared when Black speakers came onstage, next to photos of flames and whips.

Posting emotes of Black men during livestreams with Black gamers is a common racist trope on Twitch, Uhl said. “KFC had a bucket of chicken emote and people would put it next to TriHex,” he explained. “But this is like, way worse.”

The GOPConvention chat, on the other hand, was more unfiltered, lurid and juvenile when it came to women, with users openly fantasizing about Melania’s feet as she spoke, or expressing happiness that Kayleigh McEnany was now Trump’s press secretary.

It’s that quality of commentary, Nicole said, that suggests the far-right was not as massive on Twitch as it is on YouTube, Twitch’s biggest livestreaming competitor, which has in recent years struggled with the proliferation of conspiracy theories and offensive content on the site. Notably, the convention turned off live comments on its YouTube livestream.

But the large Twitch audience does speak to how well the Trump campaign has won over a segment of younger people, Nicole said.

“I don’t think it’s as large as their loudness makes it seem,” she said. “I think that they are the minority on Twitch, at least. But that’s my gut feeling. They are very loud, though.”