Sheldon Adelson, a casino magnate who became a Republican kingmaker late in his life by repeatedly donating tens of millions of dollars, has died. He was 87.

The Las Vegas Sands Corportation, the resort company Adelson founded, announced his passing in a news release Tuesday — saying the death of its chairman and chief executive officer was the result of "complications related to treatment for non-Hodgkin’s Lymphoma."

"While his business credentials — having started or been involved in more than 50 different enterprises — are unquestioned, his dedication to philanthropy and commitment to his family will truly be his legacy," the Sands said in its statement. "He will be missed by people from all parts of the world who were touched by his generosity, kindness, intellect and wonderful sense of humor."

Largely apolitical for decades, Adelson became a donor of colossal sums late in his life. His influence spread far and wide, as he and his wife, Miriam, donated to campaigns and causes through assorted super PACs. In 2012, Adelson became the largest individual donor in American electoral history, injecting more than $90 million into the presidential race in a failed effort to prevent President Barack Obama from winning a second term.

In her own statement, Miriam Adelson described her late husband as "the love of my life" and "my partner in romance, philanthropy, political activism and enterprise. He was my soulmate."

Beyond "bettering the lives of individuals," Miriam said, Sheldon "crafted the course of nations. Some of the historical changes that he helped effect — in the United States, Israel and elsewhere — are publicly known. Others are not." But "recognition of his own indispensable role was unimportant," she said, and his "ideal day’s end was in the company of family and friends, not statesmen or celebrities."

Former President George W. Bush said in a statement that he and former first lady Laura Bush "mourn the passing of a friend." He called Adelson "an American patriot and a strong supporter of Israel" who "will be missed by many — none more than his beloved family." House Minority Leader Kevin McCarthy heralded Adelson in a statement as "one of the greatest, most generous businessmen in history," as well as "freedom’s greatest friend."

Before the 2016 election, the so-called Adelson primary had Republican candidates flocking to Las Vegas to seek his blessing. "As Adelson whizzed around his Venetian kingdom on a motorized scooter during the retreat," POLITICO reported during a Republican Jewish gathering in 2014, "he was often trailed by GOP operatives, politicians and fellow donors eager to assess his state of mind, advise him on what he should do or just lavish him with praise and gratitude."

He also gave millions over the years to pro-Israel organizations, and in late December, he had provided a private plane to fly convicted spy Jonathan Pollard and his wife from the U.S. to Israel. Yet, Adelson mostly remained out of the public eye.

"Despite his soaring influence as a party kingmaker and his mammoth financial footprint," Mike Allen wrote in September 2012, "Adelson is rarely seen or heard, and he has remained mysterious even to many top Republicans." 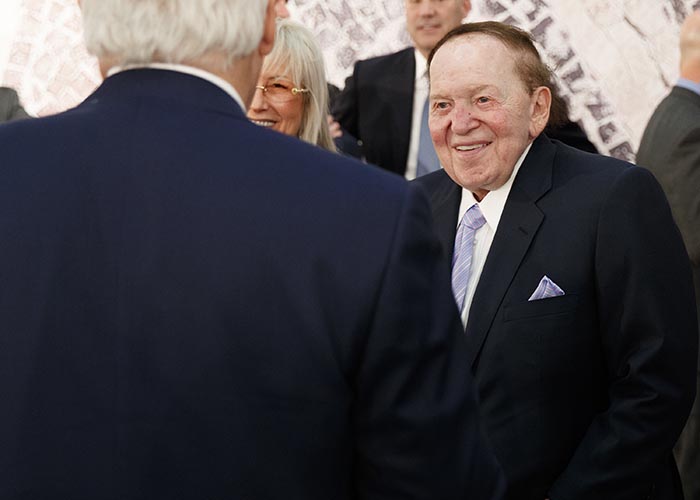 In that POLITICO interview, Adelson cited a legendary football coach in speaking of his determination to prevail: "I suppose you could say that I live on Vince Lombardi’s belief: ‘Winning isn’t everything, it’s the only thing.’ So, I do whatever it takes, as long as it’s moral, ethical, principled, legal," he said.

Sheldon Gary Adelson was born in Boston on Aug. 4, 1933, the son of a Lithuanian taxi driver and a seamstress born in Wales. "I didn’t know we were poor, but we were very poor," he would later say.

At age 12, he started his own business as a hawker of newspapers, buying the exclusive rights to peddle papers outside Filene’s Basement, a Boston department store. Four years later, he launched a vending-machine business. "Adelson clawed his way to a better life," Mother Jones magazine wrote in 2016, "through thrift, opportunism, and hard work, emerging, by many accounts, as a prickly, combative scrapper."

In 1979, Adelson was one of the founders of Comdex, a lucrative Las Vegas computer expo. “Sheldon wanted to be richer than Bill Gates,” a former CEO of Comdex told the New York Times in 2008. “He always wanted to be No. 1.”

A college dropout, Adelson relied on his moxie and gut instincts as he moved from business to business. Given how often he rolled the dice in his career, perhaps it’s no surprise he came to be associated with casinos, starting with The Sands Hotel and Casino in Las Vegas.

The Sands had a history both romantic and notorious, associated with Frank Sinatra and his Rat Pack, Howard Hughes, and mobsters like Meyer Lansky. By 1988, when Adelson bought it, it was running on fumes.

He razed it. The Venetian rose in its place.

Built at a cost of $1.5 billion, the new casino opened May 3, 1999. Glamorous assistance on that day was provided by Italian movie star Sophia Loren, who said she was "absolutely flabbergasted" by the "absolutely miraculous" resort.Casinos in other locales would follow, including Singapore and Macau. As of October 2019, Forbes estimated Adelson’s net worth at $34.4 billion. 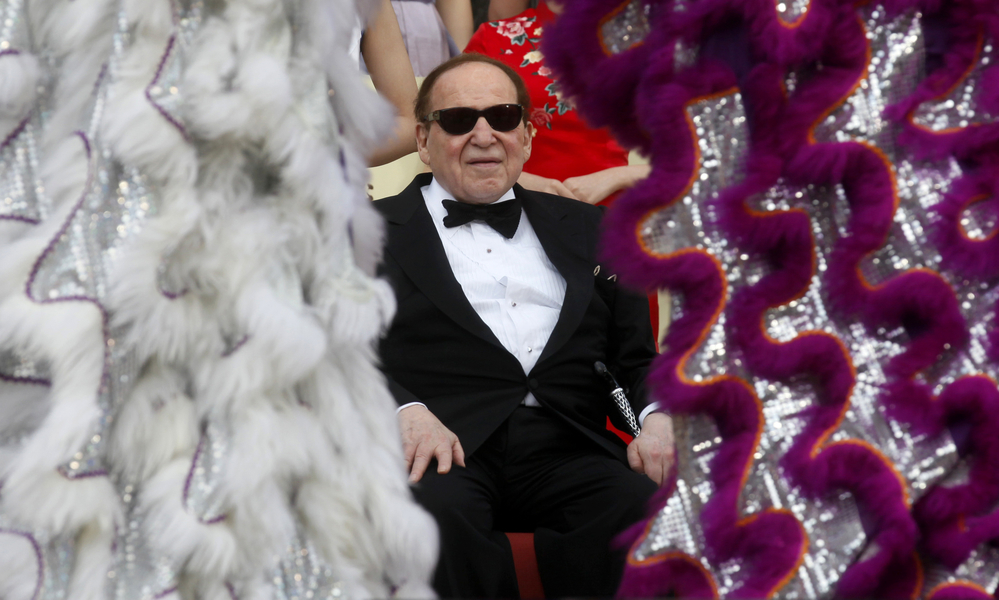 With great wealth came legal issues: Adelson and his company became the subject of a string of various government investigations. In 2017, his casino company paid a $6.96 million fine to resolve a Justice Department investigation and a $9 million fine in a Securities and Exchange Commission bribery case.

The sharp-tempered mogul was also the target of multimillion-dollar lawsuits, as well as battles with contractors and local officials. And there was harrumphing in 2015 when it became clear he was the secret buyer of the Las Vegas Review-Journal, Nevada’s most influential newspaper.

In 1991, Adelson married Miriam Ochshorn, 12 years his junior and a native of his beloved Israel, whom he met on a blind date three years after divorcing his first wife, Sandra. The two would pair up on many enterprises, including the Dr. Miriam and Sheldon G. Adelson Medical Research Foundation. "She is an accomplished medical doctor, as well as her husband’s partner in a range of business and philanthropic activities," Fortune wrote in 2012.

"Sheldon is everything to me," Miriam told Fortune for that article. She added: "We are on a magnificent flight together."

Israel would be a focus of their philanthropy, with the two donating more than $100 million to Birthright Israel, an organization that funds trips to Israel for Jewish Americans. 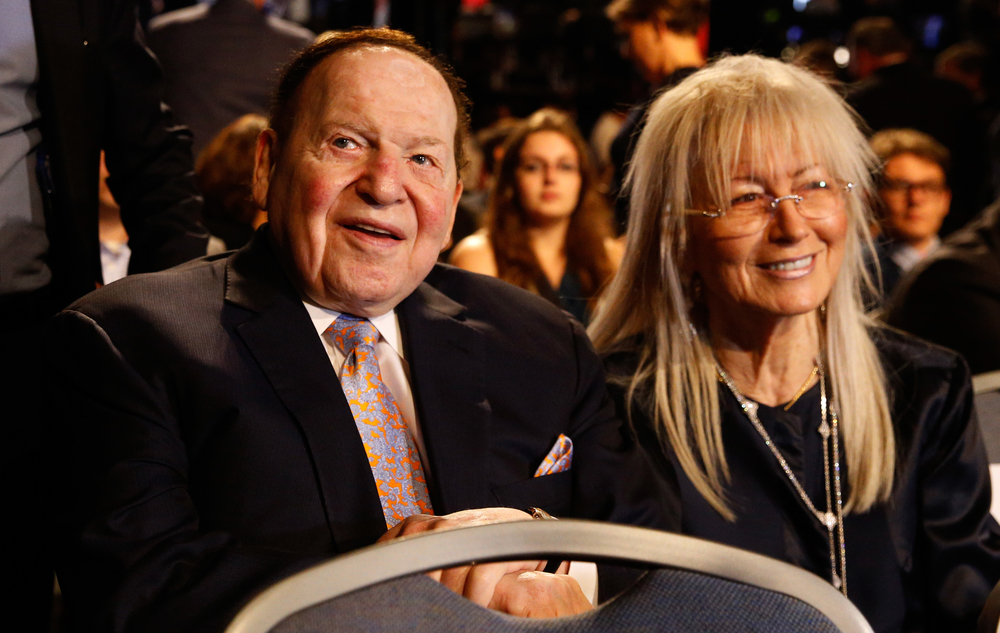 In listing the world’s most influential Jews in 2015, the Jewish newspaper Algemeiner said Adelson "continues to make outsize gifts to a range of Jewish and non-Jewish groups." (Those efforts would be cited when Trump awarded Miriam Adelson the Presidential Medal of Freedom in 2018.)

Sheldon Adelson was a relative latecomer to the political world. A Democrat in his formative years, he would always claim, "I didn’t leave the Democrats, they left me." He said it was the 1988 Democratic National Convention that inspired him — in that case, to become a Republican backer.

"Adelson said," Allen wrote, "he had been fairly apolitical until a friend invited him to his first national political convention — the 1988 Democratic convention in Atlanta. ‘It wasn’t really a lot of fun because everywhere I went … everybody was talking about what kind of job they’re going to get when Michael Dukakis became president,’ he recalled. ‘It disgusted me.’ ”

No political figure would draw his contempt more than Obama, whose Middle East policies he deemed dangerous. That concern drew him heavily into the 2012 campaign, in which he initially supported former House Speaker Newt Gingrich. "Adelson, who reportedly has donated as much as $20 million to the pro-Gingrich Winning Our Future super PAC, cares first and foremost about defending Israel," POLITICO wrote in 2012.

Once it was clear that Gingrich was not going to win, he went all-in for Mitt Romney, donating at least $70 million for the GOP nominee — and quite likely more, in the form of donations to groups not required to disclose their donors.

Romney lost, but Adelson’s lavish spending created a feeding frenzy around him for the 2016 election.

Early on, he and his wife largely remained on the sidelines, disappointing those who hoped they would bolster Florida Sen. Marco Rubio or another anti-Trump GOP candidate. “Nobody knows exactly why he’s still on the sidelines or when he might come off,” one Republican operative was quoted as saying in February 2016.

In May, Adelson backed Trump. "If Republicans do not come together in support of Trump, Obama will essentially be granted something the Constitution does not allow — a third term in the name of Hillary Clinton," he wrote. Adelson and Trump subsequently met to talk. Money flowed in.

After Trump was elected, Adelson donated to his inaugural committee. However, there were moments they didn’t see eye-to-eye, particularly when Jewish activists close to Adelson spoke up about Trump’s muted reaction to a rise in anti-Semitic incidents. In November 2017, the Adelsons also made it clear they weren’t on board with Steve Bannon’s insurgent efforts against establishment Republicans. “They are supporting Mitch McConnell 100 percent," a spokesman said.

Extending his reach beyond presidential elections, the Adelsons backed candidates in secondary races, with mixed success They also opposed the legalization of marijuana and of online gambling.

As a veteran of the gaming industry, Adelson claimed to be unfazed by the ups and downs of electoral politics.

"I happen to be in a unique business where winning and losing is the basis of the entire business," Adelson said at one point. "So I don’t cry when I lose. There’s always a new hand coming up."

Amid fiscal crisis, Murphy’s budget doubles down on progressive priorities

Biden backs up Tanden as Republicans attack her tweets