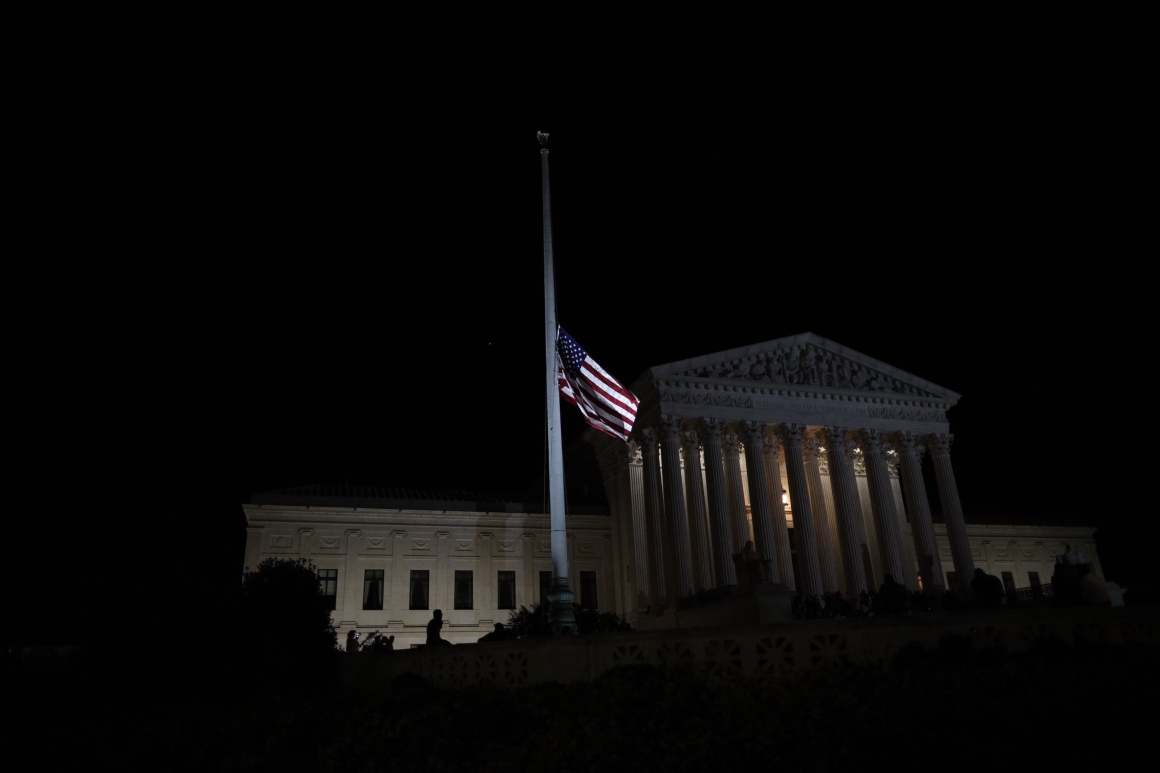 After Senate Majority Leader Mitch McConnell said late Friday he would hold a floor vote on President Donald Trump’s nominee to fill Ginsburg’s seat, attention quickly turned to the most endangered Republicans on the Senate map, including two incumbents up for reelection in states Trump lost in 2016: Sens. Cory Gardner (R-Colo.) and Susan Collins (R-Maine).

The issue is likely to supercharge base voters in both parties and add even more massive implications to the outcome, on top of the pandemic and economic crisis that are already shaping Senate campaigns. A nomination fight — either before the Nov. 3 election or teed up for a lame-duck session of Congress in the weeks after — could force tough votes for a handful of other vulnerable GOP senators running in battleground states, like Sens. Martha McSally (R-Ariz.), Thom Tillis (R-N.C.), Joni Ernst (R-Iowa) and two senators in Georgia.

Several Senate Republicans in competitive elections — McSally and Sen. Kelly Loeffler of Georgia, both of whom were appointed to their seats — immediately called for the Senate to vote on Trump’s nominee to the court. Other senators released statements praising Ginsburg’s life and service to the country, but did not say where they stood on replacing her prior to the presidential inauguration next January.

“This U.S. Senate should vote on President Trump’s next nominee for the U.S. Supreme Court,” McSally said in a tweet.

In Maine, Collins will likely face heavy pressure after her support for Justice Brett Kavanaugh sparked intense backlash and became the central issue for Democrats attempting to unseat her. Neither Collins nor her Democratic opponent, state House Speaker Sara Gideon, mentioned the coming confirmation fight in their statements on Ginsburg’s passing.

Collins has said she opposes filling a seat on the high court during the election, but she also bragged in a televised debate last week about her record of supporting nominees put forth by presidents from both parties.

Gardner, the other Republican up for reelection in a state Trump lost, is trailing in the polls against former Colorado Gov. John Hickenlooper. Gardner called Ginsburg “a trailblazing leader” in a statement but did not address his party’s plans to fill the seat. Hickenlooper’s statement also praised Ginsburg and did not mention a confirmation battle.

Beyond those two incumbents, a confirmation fight could have more unpredictable effects. Republicans have credited the 2018 Kavanaugh confirmation with activating some of their base voters, especially in red-leaning states like Indiana, Missouri and North Dakota. But a partisan fight to jam through a nominee before Election Day could also repel swing voters in states like Arizona, Georgia, Iowa and North Carolina.

Democrats moved swiftly to attempt to hold Republicans accountable after many of them sided against filling a vacancy to the Supreme Court in 2016, during former President Barack Obama’s final year in office. American Bridge, a Democratic super PAC, immediately began sending out statements and videos of press clippings of Republican senators in 2016 calling for the seat not to be filled in an election year.

In particular, the spotlight will be on a handful of senators either in the most direct position to impact the nomination, or in the most competitive races. Sen. Lindsey Graham (R-S.C.), who is facing his toughest reelection of his career against Democrat Jaime Harrison, is chair of the Senate Judiciary Committee and previously said he would not to push through a confirmation in an election year. Sens. John Cornyn of Texas, Ernst and Tillis, all of whom face competitive challenges this year, are all on the committee.

Outside groups quickly set markers for the upcoming battle. Marjorie Dannenfelser, the president of Susan B Anthony List, an anti-abortion group, called on Senate Republicans to confirm Trump’s nominee.

“This is a turning point for the nation in the fight to protect its most vulnerable, the unborn,” Dannenfelser said in a statement. “The pro-life grassroots have full confidence that President Trump, Leader McConnell, Chairman Graham, and every pro-life senator will move swiftly to fill this vacancy.”

On the other side, Alexis McGill Johnson, the president of Planned Parenthood Action Fund, a leading abortion rights organization, said the Senate should not take up the divisive nomination fight.

“To be very clear, it would be an absolute slap in the face to the millions of Americans who honor and cherish Justice Ginsburg’s legacy if President Trump and Mitch McConnell were to replace her with someone who would undo her life’s work and take away the rights and freedoms for which she fought so hard,” Johnson said.

McConnell’s announcement also energized Democratic grassroots donors. In the hour-and-a-half following his announcement, over $10 million in donations was processed by ActBlue, the online donor platform for Democratic candidates and liberal nonprofits.

Ernst’s campaign received some backlash after sending a fundraising email focused on the Supreme Court shortly after the news of Ginsburg’s death, according to the liberal political website Iowa Starting Line. Ernst said in a statement the email should not have gone out. "Though I never saw it, it was sent out under my name, and I take responsibility for it. Tonight, my prayers are with the family of Justice Ginsburg."

Ginsburg’s death was met differently among candidates in Georgia’s special election, in which Loeffler faces an intraparty challenge from Rep. Doug Collins, while Democrats have rallied behind Rev. Raphael Warnock. Because the race is an all-party ballot, Loeffler and Collins are essentially locked in a Republican primary on Nov. 3 — and both sought to strike combative postures Friday night after Ginsburg’s passing.

Collins mourned — not Ginsburg’s passing — but “the more than 30 million innocent babies that have been murdered” because, he said, Ginsburg “defended” abortion rights, which the high court established decades before she became a justice.

Loeffler was the first Republican senator to call for Trump’s nominee to receive a vote, tweeting her stance prior to McConnell’s statement.

“Our country’s future is at stake & @realDonaldTrump has every right to pick a new justice before the election. I look forward to supporting a strict constructionist who will protect the right to life & safeguard our conservative values,” said Loeffler, who was sworn in earlier this year.

Zach Montellaro contributed to this report.