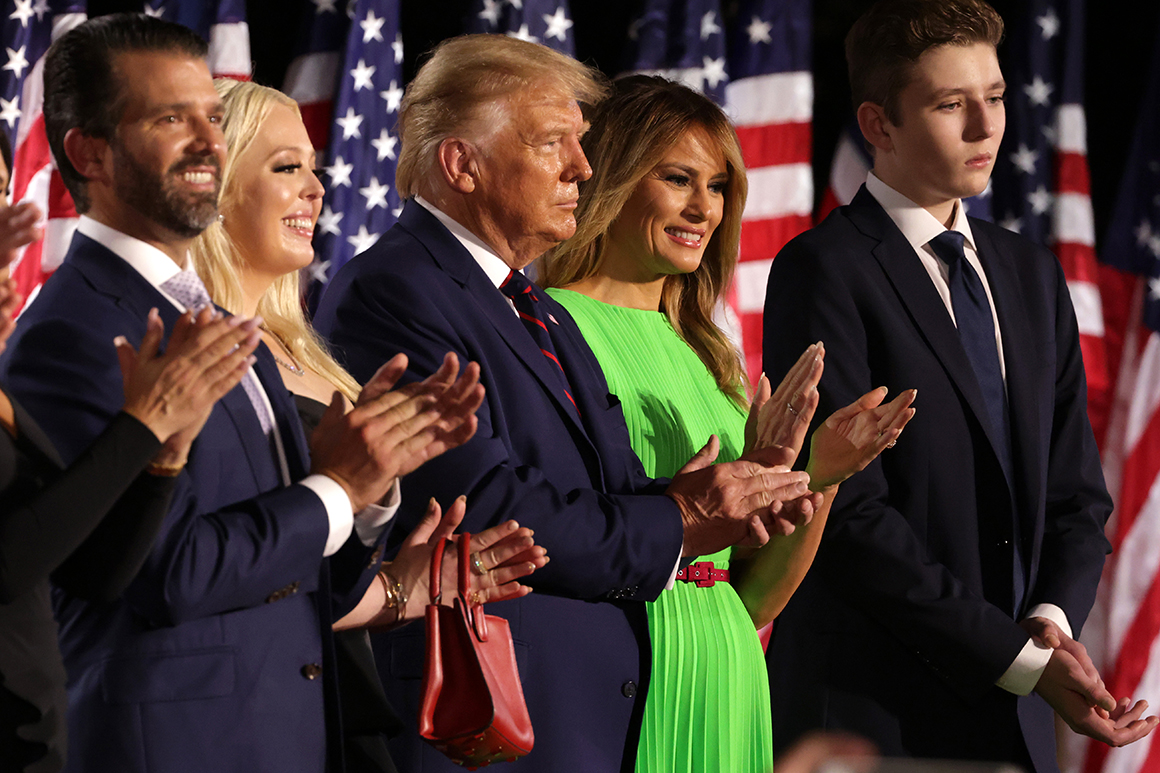 After watching President Donald Trump’s inaugural address in January 2017, George W. Bush reportedly turned to Hillary Clinton in bewilderment and uttered a phrase that has come to define much of the Trump era: “Well, that was some weird shit.”

Bush, who was not invited to the 2020 GOP convention this week, probably speaks for a lot of people watching this week’s 10 hours of Trump TV programming.

There are two ways to think about what happened over the last four days. The first is that this event was notable for its clear break with precedent. Cabinet secretaries previously declined to show up and make convention speeches, but Trump’s secretary of State spoke from Jerusalem on Tuesday and his secretary of Housing and Urban Development spoke Thursday night. Also on Tuesday, Trump appeared onscreen from the Blue Room in the White House and issued a pardon to a shocked former bank robber, the way Oprah used to give away cars.

No modern president has ever used the White House for such naked political purposes. For Trump’s finale on Thursday evening, a stage on the South Lawn was bracketed with enormous video screens displaying the official Trump-Pence reelection logos. There was opera sung from a balcony of the White House residence and fireworks on the Mall after Trump finished, framing the Washington Monument in the background.

The shattering of some of the last vestiges of keeping American government separate from electoral politics was accompanied by a frenzy of disinformation. Top White House economic adviser Larry Kudlow talked about the coronavirus pandemic in the past tense. Vice President Mike Pence suggested that Joe Biden backs defunding the police (he doesn’t). The president took credit for a law reforming the Department of Veterans Affairs that Barack Obama actually signed in 2014. (See fact checkers here and here for many examples just from Trump’s Thursday speech.)

So without being too alarmist it makes more sense to think about the past four days as an exercise in state propaganda, built around a cult of personality, than as a party convention. (Republicans suspended basic party business, like the creation of a platform.)

But it’s still worth considering what the point of the messaging was.

It fell into three baskets: There were the speeches for the MAGA faithful; a concerted effort to appeal to Black voters; and a bundle of messages aimed at suburban swing voters, especially women.

Trump might have maxed out on the first group, though his campaign is working hard to increase white working class voters, especially those who haven’t been regular voters. But Thursday was largely about the latter two groups, which make up the core of the Biden coalition.

The Democratic data analyst David Shor recently noted two surprising trends since Trump’s election. One is that college-educated white voters have become resistant to racist appeals. Some analysts predicted that Trump could continue to make gains among whites of all education levels, but this group has proved to be increasingly disgusted by Trump. They have rejected what they see as Trump’s coarseness and bigotry, swung firmly to the Democrats in 2018 and are the key to Biden’s lead.

Shor’s other observation is much less widely shared. “Black voters trended Republican in 2016,” he said recently. “Hispanic voters also trended right in battleground states. In 2018, I think it’s absolutely clear that, relative to the rest of the country, nonwhite voters trended Republican. In Florida, Democratic senator Bill Nelson did 2 or 3 points better than Clinton among white voters but lost because he did considerably worse than her among Black and Hispanic voters. We’re seeing this in 2020 polling, too. I think there’s a lot of denial about this fact.”

The Trump campaign does not deny it. It used Thursday’s program, before Trump’s speech, to show a series of vérité videos featuring Black voters explaining why they back Trump.

There is a massive policy contradiction at the heart of this GOP strategy: Sometimes Biden’s record is described as too pro-prison and he’s allegedly responsible for thousands of young Black men going to jail because of the harsh provisions in the 1994 Crime Bill, which Biden helped draft. At the same time Trump said Thursday that Biden will increase crime by “immediately releasing 400,000 criminals onto the streets and into your neighborhoods” and then “defund police departments all across America” until “no one will be safe in Biden’s America.”

But despite this inconsistency — not to mention the difficult-to-fathom idea that Trump could win a higher percentage of Black voters in the current climate — there are serious analysts, like Shor, who see the defection of some working-class Blacks to the right as in line with trends in other democracies where the education divide can be more determinative of voting patterns than racial or ethnic divides.

To add yet another contradiction into this strategy, Trump’s pitch to the first group, white suburbanites, is based on an explicitly racist narrative about Black protesters. So far it hasn’t worked. But over the past two weeks, and especially since the unrest in Wisconsin after the shooting of Jacob Blake, a 29-year-old Black man who was paralyzed after he was shot in the back seven times by a white police officer in Kenosha, Democrats have been increasingly fearful about the trends. (One recent poll of Wisconsin voters found that approval for Black Lives Matter protests dropped from 61 percent in June to 48 percent in August, and all of the change came from whites.)

Sarah Longwell, publisher of the Bulwark, a conservative anti-Trump site, captured the conflicted views of white female suburbanites in a pair of focus groups with soft Trump voters from North Carolina and Arizona. The North Carolina group, she wrote this week, “was sympathetic to the protesters and said there was a need to reevaluate America’s relationship to race.” They had heard little about any violence accompanying anti-racism protests, partially blamed Trump if there was violence, and one of them attended protests and used progressive buzzwords like “privilege.” They appeared to be the epitome of the suburbanites at the center of 2020’s most surprising narrative about race: white college-educated women who stand with BLM.

But in Arizona, Longwell’s group “was a mirror image.” Those women knew all about the violence in Wisconsin and “five of the six women were in complete agreement that what was happening was not peaceful protesting, but looting, rioting and violence for no good reason.” They wanted Trump to send in federal troops, and despite the fact that the unrest was happening on Trump’s watch, it made them more likely to support Trump.

Over the past week, and especially on Thursday, Republicans tried to press that potential advantage in a more heavy-handed but disciplined way than Trump has all year in his rage tweeting and meandering news conferences. Trump is good at creating narratives that stick even when they defy reality. He was just given 10 free hours of prime-time programming to do it. There was a lot of weird shit, but it could work.

Mike Pompeo leaned heavily into the pro-Trump lane in a lengthy speech at the Conservative Political Action Conference on Saturday...

Grenell strongly hints at run for California governor at CPAC

Richard Grenell, a top ally of former President Donald Trump, strongly hinted at a run for California governor in a...