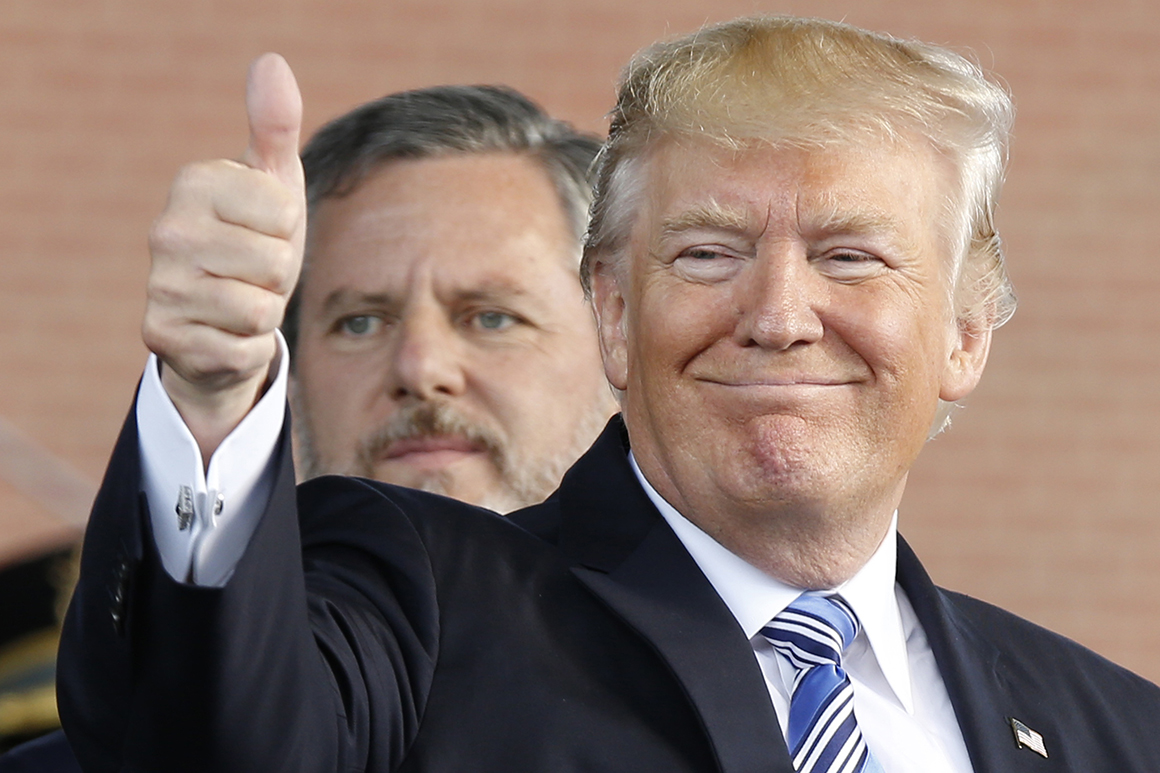 Trump issued the order in 2017. The following year, under Falwell’s leadership, the university directed more than $3 million to conservative organizations. In 2019, it created a think tank that purchased Facebook ads featuring Trump’s image and the slogan “Pray For Our President,” produced a podcast that amplified Trump’s claims of a stolen election, and recently staged a strategy session for the 2021 elections that featured only Republican politicians.

These actions appear to push the boundaries of the university’s non-profit status, particularly given that the law explicitly bans non-profits from assisting political candidates under a provision called the Johnson Amendment, named after former President Lyndon Johnson, who sponsored it in the Senate.

But Trump’s administration furthered the IRS’s already hands-off approach to monitoring churches and other religious nonprofits to the point that enforcement now appears to be nearly nonexistent, giving Liberty and other groups new opportunity to test boundaries they couldn’t have in the past.

“For someone like Falwell, who was eager to use tax-exempt resources to engage in politics, it may have given the green light,” said Brendan Fisher, director at the watchdog group Campaign Legal Center. “It’s a correlation — but it certainly seems like you can draw a line between the executive order, and Liberty ramping up its political activity in the years following it.”

Trump’s executive action was the latest step in a long decline in the IRS’s enforcement abilities. Over the last 20 years, the agency’s budget for investigating nonprofits has significantly declined, leading to fewer auditors. In addition, the 2013 Tea Party scandal — in which the IRS had scrutinized groups applying for tax-exempt status based on their names and politics — caused a backlash that has made agency officials hesitant to embark on investigations that could appear partisan, officials told POLITICO.

The White House did not respond to questions about whether Falwell and other conservative leaders shaped the administration’s approach to the IRS.

“The president has repeatedly made it clear that he opposes the Johnson Amendment’s muzzling of the First Amendment rights of religious organizations,” a White House official told POLITICO. “All Americans should be disturbed by the IRS’s long history of abusing its authority to harass religious groups.”

Falwell, an early endorser of Trump’s 2016 presidential campaign, encouraged Trump to oppose the longstanding law banning nonprofits from participating in politics. And after Trump secured the nomination, the Republican Party embraced the idea of repealing the Johnson Amendment by including such a promise in its platform at the 2016 Republican convention. A few days before the convention, Trump called Falwell and woke him up with the news.

"He was so excited," Falwell told Time magazine at the time. "After 30 years of the so-called conservative leaders who have been elected by evangelicals, none of them thought to advocate for the repeal of the Johnson Amendment, giving evangelical leaders political free speech.”

Trump couldn’t change the law unilaterally, but within a few months of becoming president, he made his executive order.

When Falwell first endorsed Trump in 2016, he was careful to do so from a personal standpoint and not on behalf of Liberty, lest the school appear to engage in partisan politics. In fact, many people at the large evangelical university strongly disagreed with Falwell’s choice of Trump, a twice-divorced New York real estate developer, over many Republicans with strong evangelical ties.

But in the years since, Liberty embarked on a range of unusual activities for a nonprofit. Falwell himself co-founded Liberty’s think tank with pro-Trump political activist Charlie Kirk and named it the Falkirk Center, a portmanteau of their names. It did not engage in traditional academic work but hired Trump allies like lawyer Jenna Ellis, ran political ads on Facebook and aired podcasts with titles such as “The Christian case for voting President Trump.” This followed Liberty’s rash of donations to conservative political nonprofits, such as the political branch of the Heritage Foundation, in 2018, for election activities the university says were nonpartisan.

In an interview, Falwell denied Trump’s actions had any effect on Liberty and said the university’s activities were carefully vetted by outside counsel in order to comply with federal law.

“We spoke with our lawyers closely,” Falwell said. “We didn’t do anything until all the lawyers said, ‘You can do this, you can’t do that.’”

The notion that churches and other religious nonprofits could have their free speech hamstrung by the federal government is a longstanding concern on the right. Since the law was created in the 1950s, some conservatives have sought to repeal it, citing First Amendment concerns.

The issue was a winner with Trump, who frequently raised it on the campaign trail, saying religious people were having their free speech stifled by the federal government, and who later vowed to “totally destroy” the Johnson Amendment at his first National Prayer Breakfast as president.

It would be difficult to repeal the Johnson Amendment without overhauling the tax code, Falwell said. But he said he has advocated for allowing nonprofits to spend a small percentage of their activities on politics.

“I don’t think there’s any way to do what Trump set out to do with today’s laws,” Falwell said.

That’s mainly because of the tax benefits conferred to 501(c)(3) organizations. If the amendment were repealed and Liberty started spending money on elections, donors to the university could give money to Liberty for politics and write off the donation on their taxes, creating a government subsidy for political activity. Super PACs, meanwhile, could reconstitute themselves as churches under the tax code in order to get more tax advantages.

The tax status of religious non-profits has long been on the Falwell family’s radar: The radio show hosted by his late father, Rev. Jerry Falwell Sr., called the Old Time Gospel Hour, was fined $50,000 and had its non-profit status revoked for two years in 1993 after an audit of Falwell’s ministry found that staff of his non-profits had been tapped to raise money for a PAC tied to his political group, the Moral Majority.

During the mid-2000s, the IRS launched an initiative to curb political activity at churches, including a highly public investigation of Pasadena, Calif.-based All Saints Episcopal Church. All Saints came under IRS scrutiny after an ex-rector at the church gave a sermon during the days leading up to the 2004 presidential election in which he spoke about an imaginary debate between President George W. Bush and John Kerry.

The sermon was critical of Bush and the Iraq War, sparking a multi-year IRS probe. Because of All Saints’ liberal tilt, progressives accused the IRS of politicizing the audit process. The probe ended with few repercussions for the church.

All Saints is one of only a handful of churches that has had its behavior publicly scrutinized by the IRS in recent decades. Most of the agency’s probes are private. Often, probes lead to few repercussions for the nonprofit.

The IRS’s capacity to conduct investigations has been declining for decades. The overall number of nonprofits probed each year by the agency has dropped by more than 60 percent since 1999, according to IRS data.

And the 2013 Tea Party scandal left a chill over agency officials that has made the IRS more hesitant to probe religious nonprofits than it was in the past, experts said.

“There’s almost no inclination [at the IRS] to look at any charities,” said Rev. Barry W. Lynn, a lawyer and activist who has brought lawsuits against churches over Johnson Amendment violations. “This is kind of a forgotten issue – and things have gotten worse.”

In the past, there were both Republican and Democratic administrations that embraced the Johnson Amendment – until it became a pet issue for conservatives and, eventually, for Trump, said Lynn.

“There is something about the integrity of the church that is lost when you allow it to become a political action committee,” Lynn said. “If you have a tax exemption, you’re obliged to do very few things. One is to not endorse a candidate.”